By Richard Davison for the Otago Daily Times

An Otago businessman is unhappy with the police response to a series of attacks on his property that he believes were racially motivated. 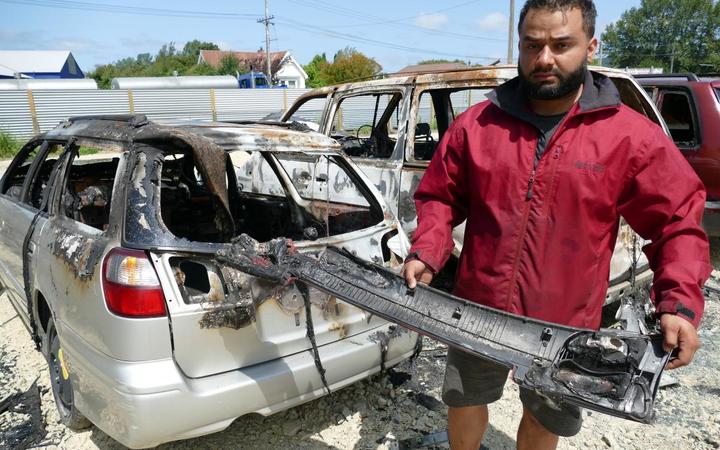 He said since opening he had experienced more than 40 instances of property damage and theft, culminating in an alleged arson that engulfed several cars last Saturday morning.

Barekzai, a Muslim, came to New Zealand as a 13-year-old Afghani refugee in 2000.

Despite showing officers from Milton and Balclutha independently collated CCTV, photographic and social media evidence which he claimed identified the culprits, he said police appeared to have done nothing to prevent an escalation in the attacks.

"Last year, these people rammed through the back of the business with a stolen ute, broke into the shed and stole all our tools, then made off with a Nissan Terrano.

"I gave the CCTV evidence to police but heard nothing, so I put it on Facebook and identified them in about two minutes.

"I've even seen them laughing and boasting about what they've done online," Barekzai said.

He was not just concerned about his financial losses - which he put at $15,000 - but also by an apparent emboldening of the alleged offenders into making racist death threats and arson, through what he believed was a "lack of police action".

"Me and my [business partner] brother have received death threats on social media and by phone during the last few weeks.

"It's pretty sick, given I'm just trying to set up a business here and even provide some work locally."

One message seen by the Otago Daily Times begins: "Your days are numbered here. We'll burn your place fully down sooner or later and then we'll come after your homes and mosques ..."

Barekzai said the fire that damaged six vehicles at the weekend could have been "devastating" were it not for the quick actions of a passing driver in alerting emergency services about 5am on Saturday.

"There's a shearer's house just over the fence, and a family of five next door. What if it hadn't been spotted, and got totally out of hand? These people have no care for anyone but themselves.

"I just want to do business and get on with life."

Clutha Mayor Bryan Cadogan said he was "sickened" by the incidents.

"The situation is sickening, and beyond regrettable," Cadogan said.

"This is simply not what our district is about, and I sincerely hope the perpetrators can be identified and brought to justice.

"No-one should have to put up with racial abuse and slurs in today's day and age, and it's a sad reflection on an element that, unbelievably, still exists in our society."

A police spokesperson said they were investigating three reported offences in relation to Barekzai's business - two complaints of "dishonesty offending" and one of "property damage" relating to the recent fire.

Asked why he had not reported more of the alleged offending to police, Barekzai said he had "lost confidence" in their ability to help him.

"Why 'property damage' and not 'arson'? Since all this began, [the police] have just tried to downplay the seriousness of what's been happening.

"I think it's outrageous they're giving these criminals a free ride."