St Johns ambulance will reassess security at its stations across the country after a sole female ambulance officer was kicked unconscious by an intruder. 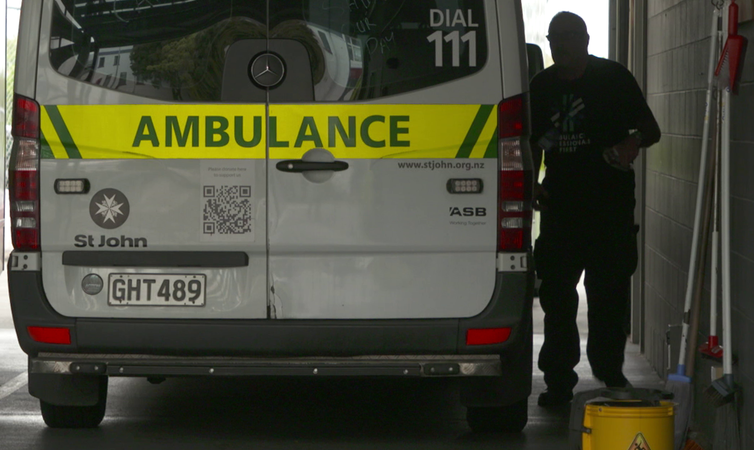 The staff member was taken to North Shore Hospital in a moderate condition. Photo: RNZ

The incident happened at the Warkworth station, north of Auckland, early yesterday morning.

St John said the woman, who was working as a paramedic alone, disturbed an intruder when she went back to the station at 12am after treating a patient.

She was taken to North Shore Hospital in a moderate condition.

St John Director of Clinical Operations Norma Lane told RNZ's Summer Report it was a "despicable and unacceptable act" and that an internal investigation over the circumstances of the incident had been launched.

"We have launched an investigation straight away into Warkworth and this will have an impact into all of our stations I'm sure. We will look at everything again with a different lens," she said.

Ambulances out of Warkworth had been relocated while a police investigation got underway yesterday, with forensic teams at the scene.

The St John ambulance service will now double-staff all shifts at its Warkworth station because of the attack, after funding constraints had previously made that impossible.

"Unfortunately we still have a small percentage of our ambulances that are single-crewed.

"About three-and-a-half years ago we campaigned for funding for all transporting ambulances to have two people on the ambulance. So we still have a year-and-a-half to get through to the end of that. Having said that we are sending out double-crewed ambulances 97 percent of the time.

She said Warkworth was due to instate double crews in a matter of weeks, but that plan would now be brought forward to minimise any further risk to staff.

"We are making sure that we are putting a double-crewed personnel on to trucks at Warkworth from this point on and we're not going to wait because we recognise the impact that this has made," she said.

Lane said the intruder was probably looking for drugs and that during another recent incident other ambulance staff had been threatened to hand over medicines or face assault.

"We had a double-crew refuelling their ambulance on a garage forecourt and someone came up demanding they hand over drugs and threatening assault and worse. It's outrageous that people can do this, not only inside a station but also in full public view."

"This is really unusual that this has happened on a station. Often our staff are faced with these unpredictable, hostile situations when they are attending an incident in the field at a site outside of the station. There are things that we can do to make sure the station is secure, controlling access.

"Clearly we had medicines on the station but they are securely locked, but when you have someone with criminal intent no matter what you put in place to try and stop them, they will resort to those violent behaviours to get in to get access."

She said the staff member was recovering with the help of staff, friends and family and that other staff had been offered counselling.

"So, we are really upset and I'm really angry that a member of the public would come into our station and do that to one of our people.

"She was kept in overnight and had scans. She was knocked unconscious, so she's clearly going to be suffering from concussion, and obviously you've got the whole trauma of what she's gone through when having experienced a vicious attack because people fear for their lives when put in that situation, so this is going to take some time for this poor las to recover.

"It's important she is given the space to recover and come to terms with what's happened.

"We have good peer support and counselling services available 24/7, for everyone, because remember it's also been her colleagues that have been affected. I think all of us who have worked on the front-line can remember the occasions where we have felt vulnerable."

She said she hoped the Protection for First Responders and Prison Officers Bill, which passed its first reading in Parliament, would act as a deterrent to would-be attackers and show there were serious consequences for assaulting ambulance staff.