An elderly Hawke's Bay woman who has mobility issues has been told "housework is a great way to maintain a good level of health" while being informed she is no longer eligible for housework help by the DHB.

Jackie Braid was shocked when a letter came through this week to inform her 88-year-old mother, who has a bad arthritic knee, that she would no longer be receiving her weekly housework support. Photo: 123RF

The Hawke's Bay District Health Board has reassessed its Household Management Services to manage their limited budget.

But Jackie Braid was shocked when a letter came through this week to inform her 88-year-old mother, who has a bad arthritic knee, that she would no longer be receiving her weekly housework support.

"Basically because my mother is only receiving housework help they've said that would cease and that she will be contacted when that won't continue," she said. 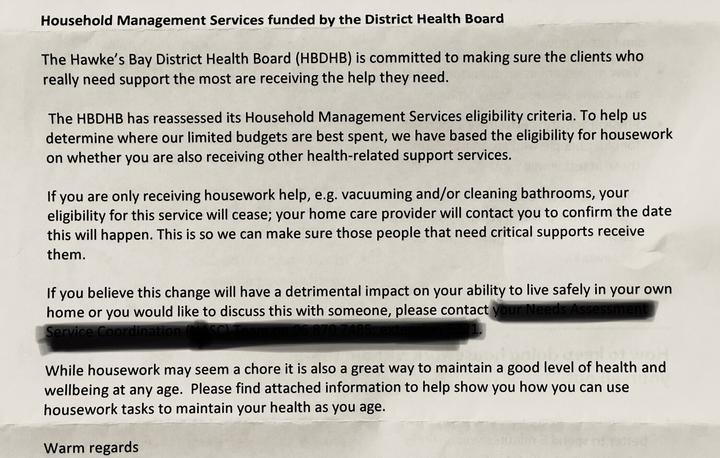 The last paragraph of the letter said "while housework may seem like a chore it is also a great way to maintain a good level of health and well-being at any age".

The back of the letter had tips for people to use housework tasks to keep active. 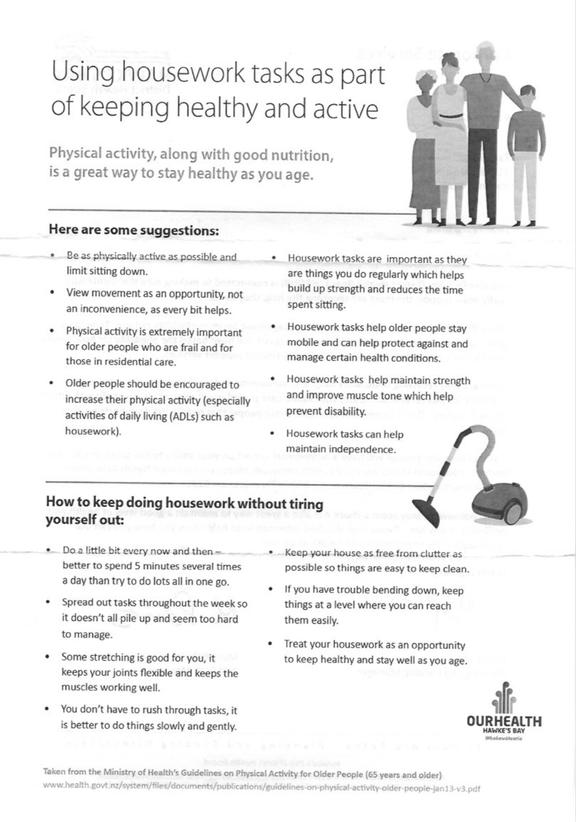 Braid said it was incredibly patronising.

"It's almost like patting them on the head saying you don't need this, so you can run along and go do your own housework.

Braid said her mother also had a great relationship with her carer, who could tell if something was amiss with her health.

she was contesting the decision alongside her mother's GP, but she was worried other people would not be able to do the same.

"I'm absolutely certain there will be a lot of vulnerable people out there who think perhaps they don't deserve to have this help, I'm actually quite angry about that.

"They just send out a blanket letter and just say it's up to you to call us if you want to be reassessed or have some support and there will be people who will not do that, who need this service."

The Hawke's Bay DHB's executive director of planning and funding, Chris Ash, said the review was to ensure eligibility for the service was standardised for all clients so those who needed support received it.

"The DHB acknowledges some clients' health needs may have changed and for this reason we have made it clear to clients they can contact our needs assessment service for reassessment."

Ash said during that period, services would continue and if a review by a clinical panel believed services should remain, they would.

"We apologise for any stress or uncertainty this letter may have caused, whilst not our intention, we would like to give an assurance to clients they will be listened to, and we will work through this process to ensure those who still need support in place, will continue to receive it, he said.

He added a number of people had phoned in wanting to be re-assessed.

But the news of another DHB dialling back its household management service came as no surprise to Home and Community Health Association chief executive Graeme Titcombe.

"The vast majority of DHBs are now only providing it in conjunction with personal care, there are probably one or two or three or four who are providing household support as a discreet service and I believe Hawke's Bay is one of them," he said.

Titcombe said it had become a growing trend around the country for a number of years.