A Nelson family ended up in a very dangerous situation after they went kayaking on the Motueka River without the proper equipment or experience, police say. 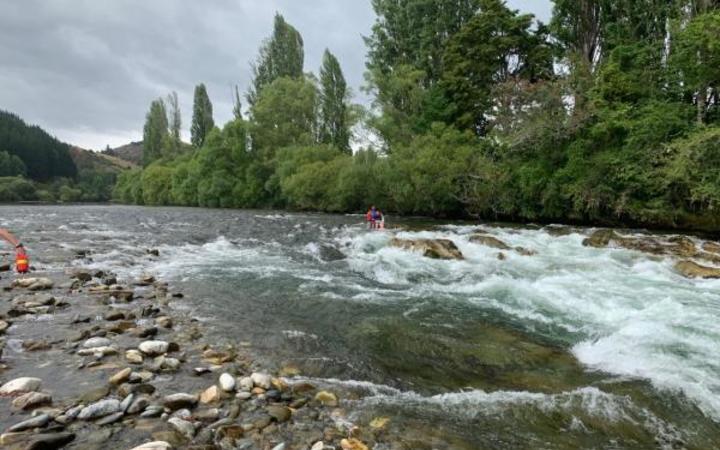 Some of the family trapped on rocks in the river as they waited for rescue. Photo: Supplied / NZ Police

Police Search and Rescue co-ordinator Sergeant Malcolm York said the family encountered rapids they were not prepared for near Ngatimoti.

A woman in the group capsized and was swept down river head first, and a teenage girl became pinned against a rock at the top of the rapids, York said.

The girl's father managed to get to her and he made the right decision to stay in a safe position on a rock and call for help, according to York.

The family were assisted by Police and Fire and Emergency staff and members of the Tasman LANSAR River Search and Rescue team were dispatched with a jet boat to the scene.

Rescuers gave the stranded pair helmets and walked them upstream to the jet boat.

They were uninjured. The woman who capsized was able to get herself to shore safely.

No-one in the family was wearing a helmet and they were in kayaks only suitable for calm seas and lakes, York said.

It was important for people to know their limitations and to stay within them, he added.

Too many lives had been lost on the Motueka River over the years, he said.

"Even with the right training and equipment it's always important to find out from a local expert about the section of river you want to run and preferably go with someone who has run the river before."

Anyone wanting to kayak on a river this summer is being told to do it with a trained professional, or someone with previous experience.

The Motueka River is considered to be grade two, meaning it is one of the easiest rivers to travel down in New Zealand.

Despite that, it's hazards can prove fatal for the untrained.

Mick Hopkinson, from the Tasman White Water Rescue Team said if people wanted to kayak on rivers, it was important to be prepared.

"If you really want to be a river runner either join a kayak club or go with skilled, experienced friends who can look you after when things don't go to plan.

"Sit upon kayaks are designed for family fun on easy, safe beaches which are sandy and shallow with an incoming tide and an onshore breeze."