By Guy Williams of the Otago Daily Times 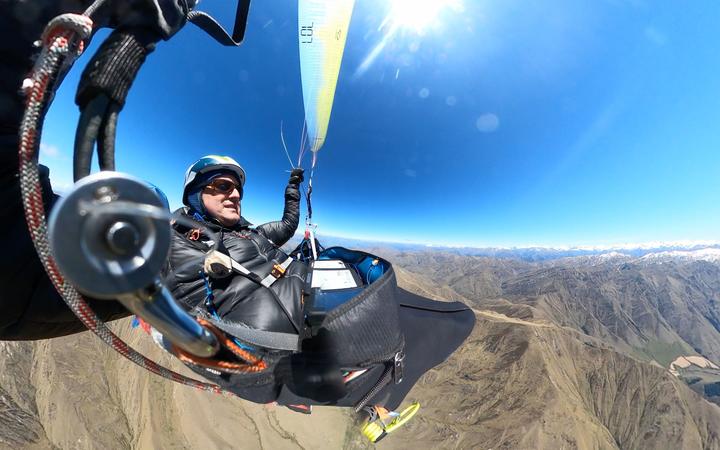 Louis Tapper completed a large triangular route that took him over Lake Wakatipu, the Rockburn Valley, and almost to the head of Lake Wanaka. Photo: ODT / Louise Tapper

Tapper, who calls Queenstown home, said he had low expectations when he took off in a light breeze about 11.30am on 23 December.

But he found excellent conditions higher up as he completed a large triangular route that took him over the head of Lake Wakatipu, the Rockburn Valley, past Mt Earnslaw and Mt Aspiring, and almost to the head of Lake Wanaka, before landing near his takeoff point about 7.40pm.

Averaging 24km/h, he reached an altitude of almost 3000m, getting lift from thermals along ridges and "convergence areas" where winds from slightly different directions came together and forced air upwards.

The record, ratified by a committee of the New Zealand Hang Gliding and Paragliding Association this week, beat the previous mark of 190km, set by Nick Neynens, formerly of Glenorchy.

Tapper, who has been national paragliding champion since 2018 and competes in Europe for several months every northern summer, said it was an "unexpected day".

"I wasn't expecting it to be so good," he said.

"We've had a lot of wind and rain this season, but we just had that one perfect day."

He had benefited from flying a similar route twice before and felt there was scope to extend the record.

"I spend a lot of time trying to understand the weather in this region ... and have got pretty good at reading the wind and weather conditions in different parts of that flight."

The flight would give him a head start in the national and international Xcontest standings, for which paragliders can upload details of any flight.

A pilot's best three flights during a season count towards their overall standing.