By Jacob McSweeny from the Otago Daily Times

An advertisement using strip club imagery to draw more women into construction careers is tone deaf and could have been done a lot better, a gender academic says. 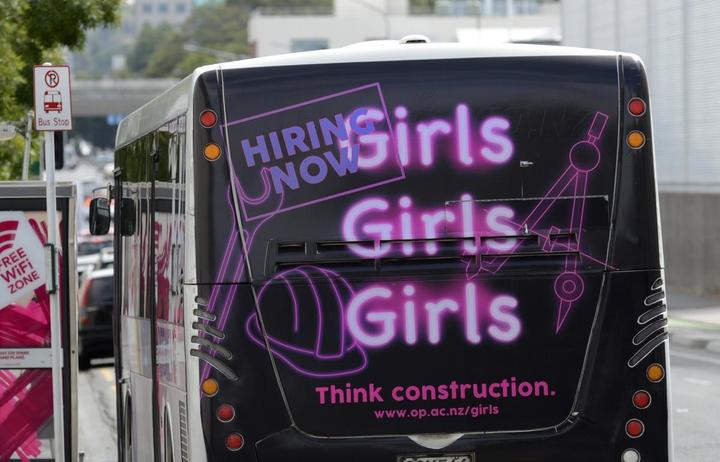 An advertisement Otago Polytechnic has put on buses to draw women’s attention to a career in construction. Photo: Otago Daily Times/Gerard O'Brien

It includes pictures of building gear in the background and at the bottom says "think construction" and the address for an Otago Polytechnic web page explaining the advertisement.

"If you're reading this, you must have seen one of our ads," the web page reads.

"These ads are a bit cheeky, but they've got to be - challenging society's ingrained gender norms isn't easy!

"We know that working in a male-dominated field might not be smooth sailing. But if our saucy ads encourage you to consider, or just imagine a career in this industry, we've succeeded!"

The page notes 90 percent of the construction workforce is male, that there's a demand for workers and pay is usually good.

A senior lecturer in gender studies at the University of Otago, Rebecca Stringer, said Otago Polytechnic got it wrong.

"It isn't cheeky, it's tone deaf. Far more positive and just as likely to attract hits on the website would be something celebrating women in construction.

"Not 'here's some sexism, oops only joking, guess what, we're for women in construction'."

She said safety on worksites would be a more attractive proposition for women interested in the industry.

"Women don't just want to know that there's no sexism, they want unions, they want guarantees of proper work, they don't want precarious work and they want workplace safety. Just like guys do."

"An advertising campaign promoting a commitment to safety and all of its forms - that's deeply attractive to a woman looking to work in that industry," Stringer said.

Otago Polytechnic chief executive Phil Ker defended the organisation, saying it had been running a "Women in Construction" campaign to "address the gender imbalance" in the industry.

"One element of our extensive Women in Construction campaign is a Girls Girls Girls visual advertisement, which was conceived by our all-female team of marketers as a tongue-in-cheek component of the broader campaign," he said.

They understood the advert would be polarising but they believed that any controversy was worth it to get the message across.

"We consider the Women in Construction campaign to have been a success - it has generated 58 study applications as a direct result of digital advertising to date. However, we regret any offence caused as a result of the campaign content."

- This article was first published on the Otago Daily Times website