Thousands descend on Mahia's white-sand beaches for summer, putting a strain on resources and riling residents used to a quieter life. 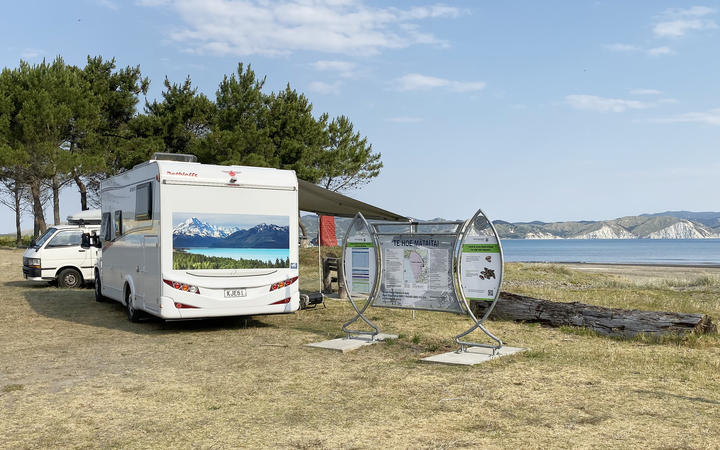 One by one they roll up. Retirees in well-appointed motorhomes, oblivious to the traffic snarled up behind them. Young travellers in converted Toyota Estimas with the all-important blue sticker - "self-contained" - a passport to some of the finest campsites in New Zealand.

From early afternoon they start to congregate near the public toilets at Opoutama/Blue Bay, just off the main road to Mahia Beach.

The early birds snare the beachfront sites, with views down the western side of the peninsula. Initially they're well spread out, but by dinner time the place is packed.

A local woman eating fish and chips on the beach looks back and wonders aloud: "What's the point?"

They've travelled miles to get to paradise but are parked less than a metre from their freedom camping neighbours.

Joe Hedley, a Mahia resident for 22 years and volunteer for the local fire brigade and St John ambulance service, says locals live a quiet life for 11 months of the year - and then the silly season hits.

Hedley is philosophical about sharing the peninsula with holidaymakers.

"It's a great spot that we, as residents, have to share."

But Bill Shortt, a former Wairoa district councillor who moved to Mahia 17 years ago, isn't sold on freedom campers.

"I call them modern-day gypsies," says Mr Shortt. "They get a damn cheap holiday on the ratepayer." 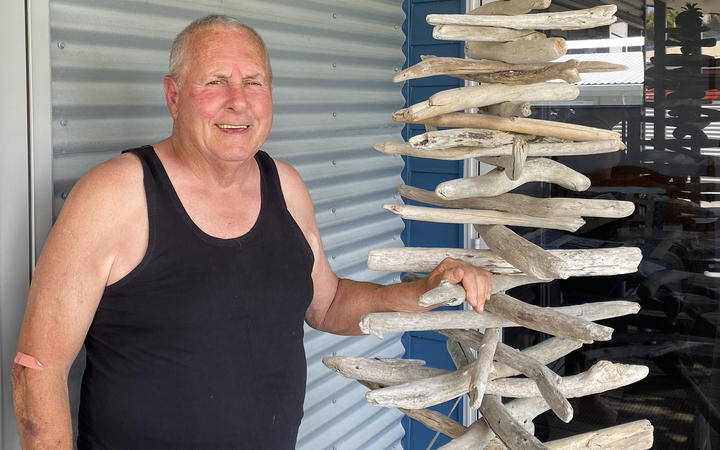 Of course, it's not just vehicle-dwelling tourists who are responsible for the summer visitor influx in Mahia. The area's population - about 1160 people for most of the year - swells with bach owners and renters, campers at the holiday park, friends and family, day trippers, and boaties.

Mahia's sole-charge police officer, Senior Constable Craig Henneker, is planning on 17,000 people being in the area on New Year's Eve, with the Mahia festivities a rite of passage for under-18-year-olds, who aren't old enough to get into Gisborne's Rhythm and Vines music festival.

Henneker will be backed up by more than 30 police officers from Hawke's Bay and Wairoa for the night, with police numbers rolled back by January 6 when the "party animals" head back to work.

To help keep the revellers under control, a 24-hour liquor ban for the entire peninsula is in place from December 20 till January 20.

The council will bolster its provision of waste management services in Mahia over summer, says May.

The council received a $200,000 responsible camping grant from the government earlier this year, allowing it to have freedom camping wardens in Mahia this summer.

Tangata whenua groups Rongomaiwahine Iwi Trust and Mahia Māori Committee are contracted until April to run the scheme, with wardens monitoring campsites, refuse and public toilets, and freedom campers liable for fines of up to $200 if in breach of the council's freedom camping bylaw.

May hopes to have wardens in Mahia next summer too, but that will depend on the council securing more funding.

Mahia Māori Committee chairman Paul Ratapu says wardens have been on duty since early December, covering the peninsula and Wairoa between 8am and 8pm seven days a week. 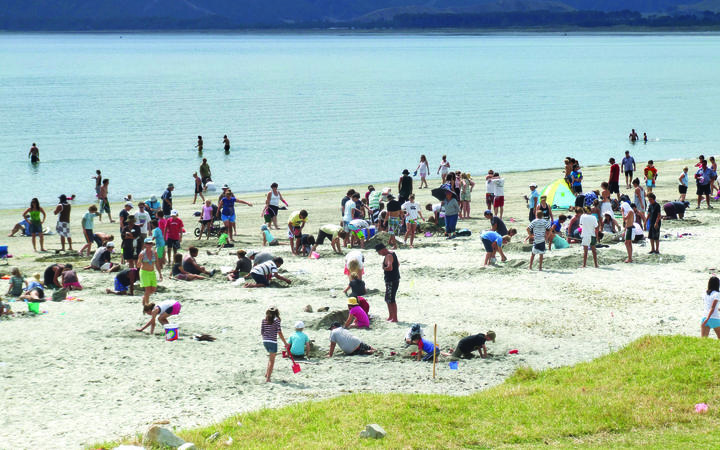 Mahia’s population – about 1160 people for most of the year – swells with summer holidaymakers. Photo: Supplied

Before the scheme was established, the committee had for several months discussed with the council ongoing issues with freedom camping in Mahia, including campers leaving behind human waste and parking in restricted areas, Ratapu says.

Rongomaiwahine kaumatua Pauline Tangiora, who moved home to Mahia 33 years ago, thinks freedom camping in the area is "out of hand".

Sites set aside for freedom campers get so inundated with visitors that locals' access to the beach and kaimoana is restricted, and that has left people in tears, Tangiora said.

She questions the travellers' value to the local economy, suspecting most fill up on supplies at supermarkets in Wairoa or Gisborne.

The council updated its freedom camping bylaw earlier this year, extending restrictions on where people can park up for a free night's kip in Mahia. Further restrictions will be considered by the council early next year.

At Mahia Beach Store, owner Bevan Cutler is gearing up for 13-hour days during the silly season. He says visitor numbers start to pick up from Labour Day weekend and peter out after Easter.

Cutler notices a big difference in the attention paid by Wairoa District Council to public amenities in Mahia during the peak season.

But he believes the council can't justify providing the same level of service all-year round, when it's mostly catering for a much smaller population.

More than half of the area's 1062 houses were unoccupied during the census in March 2018.

May says securing government funding to support the council's work in Mahia over the summer lessens its impact on ratepayers.

Along with the $200,000 responsible camping grant, the council this year received $229,500 from the government's tourism infrastructure fund to improve recycling services in Mahia and to put in a dump station at Opoutama/Blue Bay.

The Kaiwaitau Road recycling site is normally open for only two hours on the first and third Sunday of each month. The plan is to provide a drop-off centre with extended opening hours and a place to dispose of garden waste. The council has set aside $150,000 of its own money to help fund the improvements.

Hedley says Mahia is crying out for a green waste disposal option other than the 100km round trip to Wairoa's landfill and recycling centre.

Illegal rubbish dumping has been a problem on the peninsula. It's often blamed on freedom campers, but Hedley suspects locals are usually to blame. He has noticed much of the fly-tipped waste contains household items including furniture.

People in Opoutama and Mahia Beach say the official rubbish bags for collection are small and expensive at $5 each. 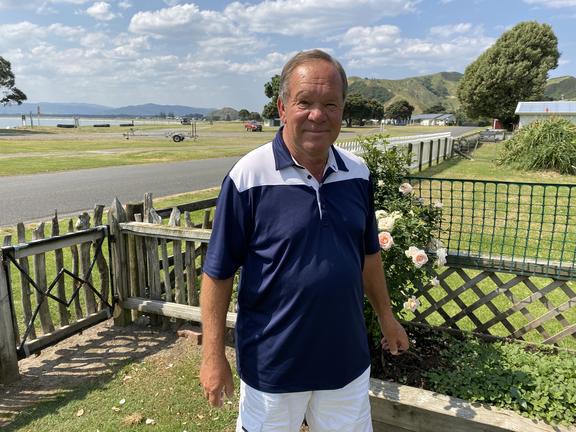 According to a council-commissioned report, the area is expected to continue leading household growth in the Wairoa district for the next few decades. It's the setting for several new housing developments and home to a Rocket Lab launch site, where a second launch pad will be built by the end of next year.

"The place is on a roar at the moment, and I don't know when it will stop," he says.

No doubt Mahia's growing pains will be kept on the council's agenda by a local ratepayers' association to be established early next year.

The group will initially be focused on roading and wastewater issues, says David Clifton, who retired to Mahia two-and-a-half years ago and is leading efforts to set up the association.

"I have observed over the last couple of years some disquiet about Wairoa District Council, mainly that Mahia ratepayers' interests aren't well represented at the council," Clifton said.

"There's a general feeling the council thinks Mahia ratepayers have plenty of dough so can foot the bill," he said.

But Wairoa Mayor Craig Little says Mahia gets as much council attention as any of the district's communities.

It is a difficult job trying to balance the needs of all Wairoa residents and the council endeavours to do its best, Little said.

Shortt, who claims to always be at war with the council, is backing the association.

He believes the peninsula's ratepayers are short-changed, with no town supply, "a Clayton's wastewater scheme", minimal roading and a 100km round trip to the library in Wairoa.