An Auckland company is breathing new life into plastic waste that would otherwise be destined for landfill - turning it into a base for sports fields. 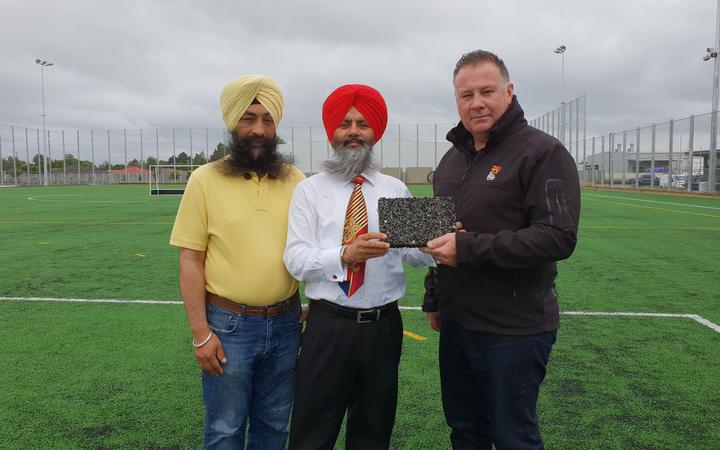 Gurdwara Sri Kalgidhar Sahib Sikh Temple in the south Auckland suburb of Takanini was one of the first in the country to try the product out.

Its newly-built football field was barely affected by a heavy rainfall.

Stephen Stones, managing director of TigerTurf - a company that installs synthetic turf, said the base had made a difference.

"We've had really heavy rain all morning. If this was an actual field, it will just be a bog. It will be wet. You can see it's dry. All the water has gone. You can playing on it straight after the rain," he said, adding that the artificial fields could increase play time to a large extent.

Stones said it used all kinds of plastics - from milk bottles to bread bags - and no sorting was needed.

He said the plastics could be ground into little chips before being made harder then bound together with tyre chips, with holes between the granules allow water to run through. 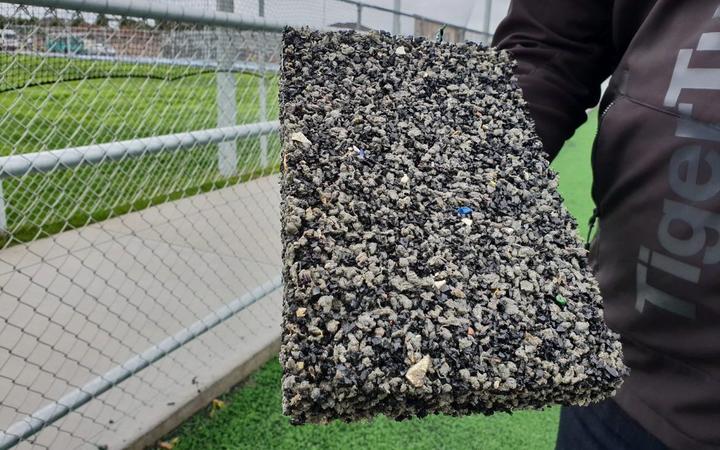 A sample of Ecocept, which is made from end-of-life plastics and old car tyres. Photo: RNZ / Liu Chen

At the temple's new field, there are also three big tanks at one end storing water collected from the drainage - which can then be reused.

He said when the synthetic turf on top of the base wore out it could be reused to make more of the base.

In the meantime, the plastics and rubber were being imported from Europe because it was cheaper with foreign government subsidies.

Stones said the company would love to get to a point when it could use waste from New Zealand.

"A lot of the things that we're doing is about raising awareness to see whether we can get local and central government support to subsidise some of these recycling efforts so that we can use our own waste," Stones said.

"Ultimately we're reducing landfill on the planet which is not a bad thing, but we'd like to be doing it at our own backyard."

Lali Ranvir Singh, president of the temple, said they could not wait for the official opening of the sports field in March.

"So many local clubs and local schools want to play here. There's a big interest in the community. They really want to see it."

So far, five schools, sport clubs and community groups have introduced the turf base in New Zealand.