Drones are being flown amongst the gannets at Auckland's Muriwai Beach, much to the alarm of birdwatchers and conservationists. 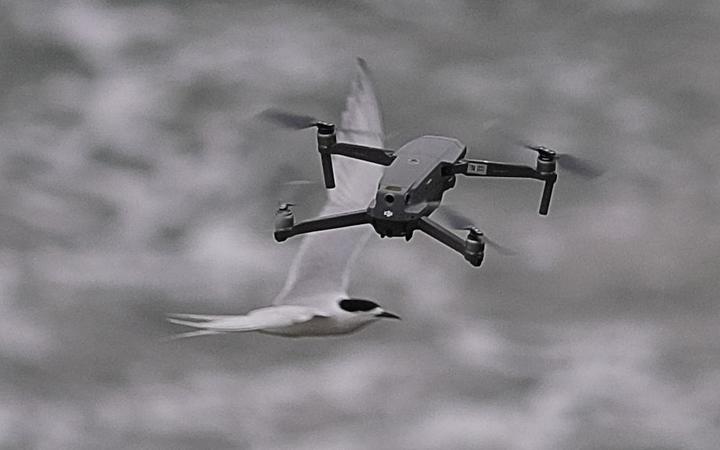 Permits are needed to fly drones on conservation land and in Auckland's regional parks, but some people appear to be oblivious to the rules.

It is a major headache for the Department of Conservation, which says drones can cause serious harm to some of the country's most precious wildlife.

Hundreds of gannets nest at Muriwai Beach from August to March, on a big cliff, with the ocean beyond.

Ian McLean, from Birds New Zealand, said he and other bird watchers were becoming increasingly anxious about drones being flown far too close to the gannets.

"Most seabirds or shorebirds are constantly looking up at the sky, they're looking out for larger birds which might predate their eggs, like gulls or harriers, and it scares them to see a drone flying over."

McLean said the drones posed more risks for the birds than just collisions.

"It puts them off their game, they are put into making a predator response, which might mean mobbing that drone and that takes them away from their chicks."

Muriwai Beach is a regional park, so permission is needed to fly drones there.

Auckland Council ranger Stephen Bell said they had five reports of people flouting the rules over the last few months.

He said drone pilots had to contact the council first.

"So we can see what they're proposing to do, and we can make sure that they are staying away from all the areas they have to stay away from, like over people and over wildlife."

The Department of Conservation is targeting irresponsible drone pilots this summer.

Senior community ranger Kat Lane said it was becoming more of a problem. 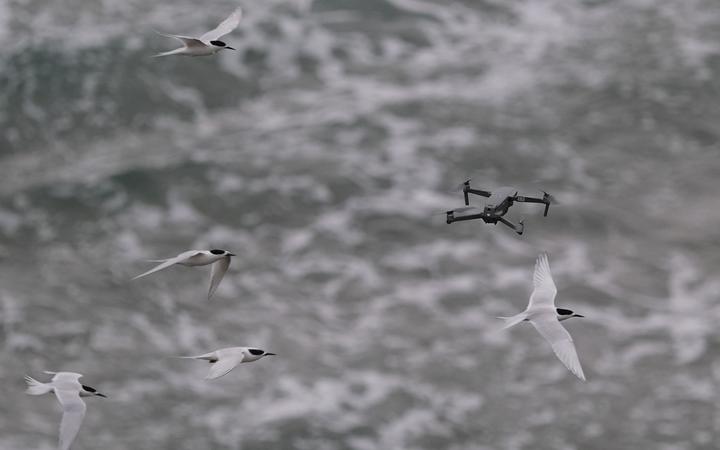 "[The birds] were just so disturbed by what on earth this drone was, harassing them, they literally tried to dive bomb it and get it out of the sky.

"And they did. They knocked it down and I think broke the drone."

Lane said that was something rangers had never seen before, and drones could undermine work to protect vulnerable species, like fairy terns.

"We do loads of habitat creation, we do tons of predator control, but we've had a few examples where drones have come along and forced the fairy terns to leave their nests and this can open up the nest to predation from other species such as gulls and harriers. There could be a risk of abandonment that they leave that nest and don't come back, and there's also the risk that eggs can cool down or in some cases where the fairy tern can hunker down, it can lead to over-heating of the eggs.

"It really isn't good news for some of our most threatened birds."

As well as disturbing wildlife, drones could also be a nuisance for people trying to enjoy the outdoors, Lane said.

The Department of Conservation is urging people to use drones responsibly and check the rules before the use them over conversation lands or waters.