Our dogs are diversifying as rapidly as we are, and greyhounds, schnauzers and shih tzus are all on the rise. But clinging on stubbornly at the top is a labrador called Bella. 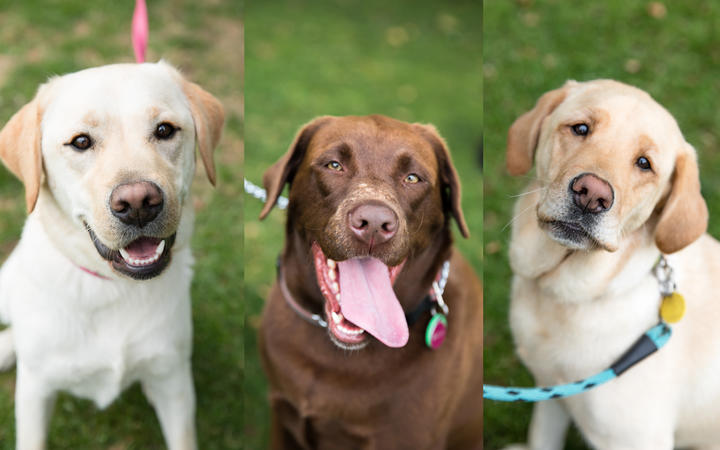 Head to any dog park or beach early in the day, draw in a big lungful of crisp morning air, expel it with a shout - "Bella" - and watch the dogs come running.

"It's incredible, yeah - you'll yell 'Bella' and you'll honestly get three or four other dogs perk up," Chris Barstead says. His own Bella pricks her ears up at the name. "Or other people will be calling their dog [Bella] and she'll be confused."

Lindsey Bradfield and her Bella regularly cross paths with another Bella at Narrow Neck beach on Auckland's North Shore. "That's quite funny, calling for your own dog and they both come."

Chloe Leuschke had no idea the name was so common when she and husband Edward bestowed it on their Bella as a puppy. "Even one of the girls at work, her dog, I didn't realise, was called Bella," Chloe says. "We realise we're not that original." They liked the name Isabel when their daughter Charlotte was born last year, "but we couldn't call her Isabel, because we had Bella". (Now 15 months old, Charlotte shares her name with 232 other New Zealand babies born last year - the most popular name for girls for the second year running.)

Of the 111,000 dogs registered in Auckland, 1659 of them are called Bella - well ahead of second-placed Charlie. The name seems to cross cultures - there's a Bella Ngatai, a Bella Zhao and a Bella Kumar all registered in Auckland. It's the most popular name for dogs in Christchurch, Dunedin, Nelson and Tauranga, too.

But there's another choice New Zealand dog-owners are making that's even less original than the names they're giving their pets. Chris, Lindsey, and Chloe's Bellas (along with the mystery Bella at Narrow Neck) share something else in common: they're all labradors.

The breed counts for one in eight pure-bred dogs in New Zealand, and it's likely many of the 212,000 cross-breed dogs around the country have a hefty dose of lab in their genetic make-up too. More unusual breeds - greyhounds, miniature schnauzers, and shih tzus - are climbing up the ranks, but the labrador is still canine king-pin. 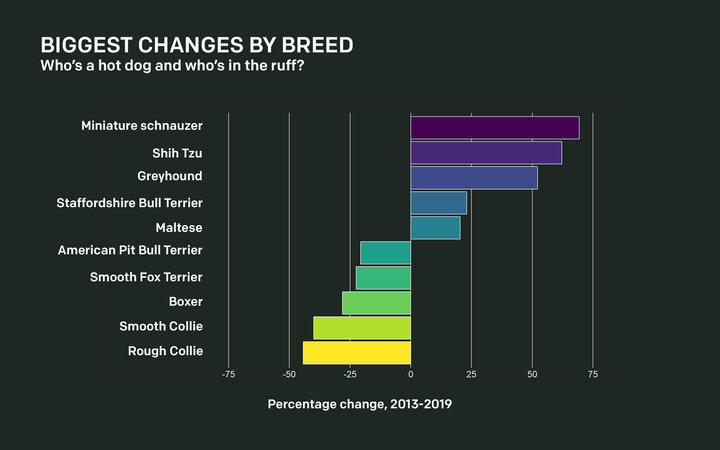 It's been 75 years, but Pat Woollaston still remembers the first labrador she saw.

As a little girl, she would visit her grandparents in Greymouth on the West Coast, and it was there she spotted him.

"This is a long time ago - the greengrocer used to come down the street and he had a labrador. And it used to arrive before him, and its head was up and its tail was up and it was just surveying the whole place and I thought, 'Wow!' - I was only little - 'Gosh, what a neat dog! He just really looks as if he knows what he's doing.'"

That first impression stuck. It was another 25 or so years before Woollaston got her own dog but when she did, she knew exactly what she wanted. Nero, a black lab, was her first labrador - and she's lost track of how many she's owned in the 50 years since then. She estimates she's bred 400 puppies in her time as a breeder: 400 little wriggling beans with black noses and ears like scraps of silk. 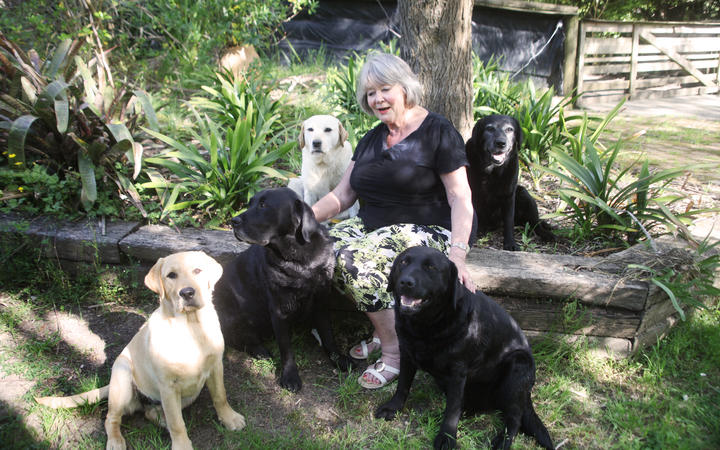 If that sounds like a lot, consider this: there are currently 41,385 labradors registered in New Zealand - 10,000 more than its nearest rival, the border collie. Since 2013, they've gone from being the most popular dog in 31 of New Zealand's 67 council districts, to the most popular in 38 districts: all the cities, and an increasing number of smaller towns.

There aren't actually any more labradors now than there were in 2013, but they've benefited from a drop in other breeds that used to be popular. In certain rural areas where border collies, in particular, used to reign - Selwyn, Waimakiriri, South Taranaki - the labradors have leap-frogged to the top.

Confusingly, the labrador is not actually from Labrador (in north-eastern Canada), but from the neighbouring island of Newfoundland - namesake of another larger, much shaggier dog. In the early 19th century they were working dogs, helping cod fishermen haul in their nets and retrieving the odd fish that tried to make a getaway. They were soon imported to England and eventually became shooting and companion dogs for the aristocracy.

Pat Woollaston has combed through old newspapers and other archives to try to work out when labradors first arrived in New Zealand. "The earliest record I have found was in about 1875… It's marginal whether it's a labrador, but it's a family photograph and there's a dog in there."

They didn't used to be so ubiquitous. Woollaston estimates the breed has really taken off since the 1990s (RNZ could only find New Zealand records going back to 2003, but labradors have topped the American Kennel Club's list of breeds from 1991 onwards).

They've been helped in recent decades by good PR, Woollaston thinks. Almost all guide dogs in New Zealand are labradors, along with many drug dogs at airports. People are used to seeing them, and that effect has snowballed. "A lot of people say, 'Oh, my Uncle Bob had a labrador. Gee, he was a nice dog, I'm going to get another one like that,'" she says. "They sell themselves from generation to generation." 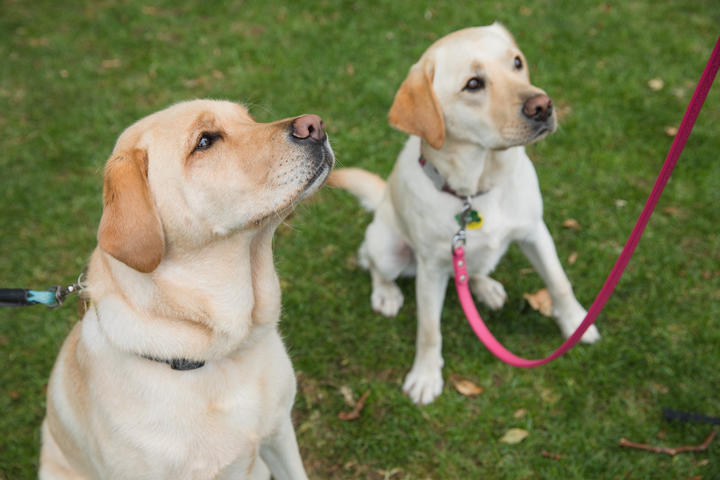 Why the obsession though? Aren't they, well - a bit boring?

Woollaston would choose "moderate". "There's nothing flashy about a labrador. They're a nice size, they're not too big… There's nothing outstanding about them and they will do just about anything." Bred specifically as retrievers, they'll still make great gun dogs as well as great companions, she says. "They'll do most things that most dogs can do. They may not do them as well as the dogs that are bred specifically for a purpose but they will still give it a fair go." Absolute people-pleasers then; a kind of platonic ideal of a dog.

There's something else important about them, too, Woollaston says. "They've got a kind expression - people like them. You look at a labrador and it looks back with those nice, kind eyes and you think, oh, that makes me feel good."

From across Victoria Park in downtown Auckland, Bella the chocolate lab has spotted Bella the yellow lab trotting over the leaf-strewn grass.

Restrained by her lead, she has to settle for letting out four big barks. As soon as the two are in touching distance, though, they're wrestling on the ground in an uncoordinated whirl of fur before their respective owners, Chloe and Lindsey, have had a chance to introduce themselves.

Both women wanted labradors for the same reason - their "amazing natures", Lindsey says. Chloe and Edward Leuschke were already planning a family when they got Bella three years ago, so wanted a dog that was good with kids, Chloe says. "And she's so amazing. Charlotte literally crawls all over her and she just sits there and loves it. They're like best friends." 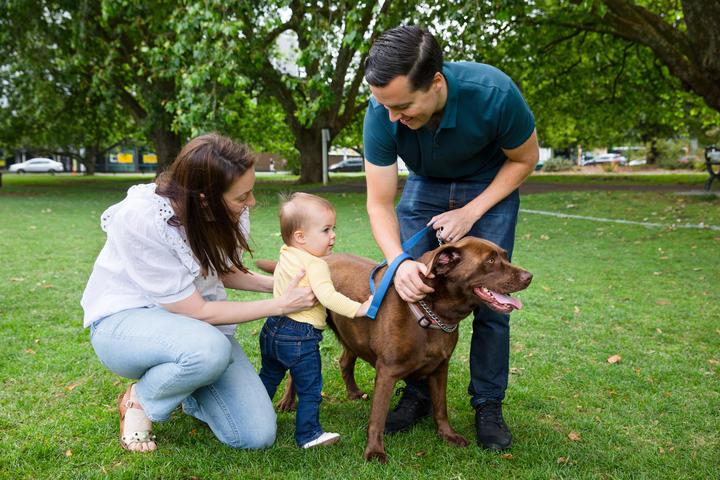 Chris, who shows up with his Bella a few minutes later, is expecting his first child in January. "She'll be a very good sister to our little man coming along. She's really good with kids, puts up with being poked and prodded and loves that kids just feed her." With a labrador, "you kind of know what you're getting", he says. "You're not gonna get surprised by many labs."

By now, Lindsey's Bella is fixated on an under-11s cricket game in the middle of the park, edging closer before being called back by her owner. "She's stolen the ball at a cricket game before," Lindsey says. "I eventually got it back but the game had to wait."

So what about the name?

Chloe says Bella was just a name she liked. Lindsey wanted a two-syllable name - easier to call across a large park or stretch of beach. 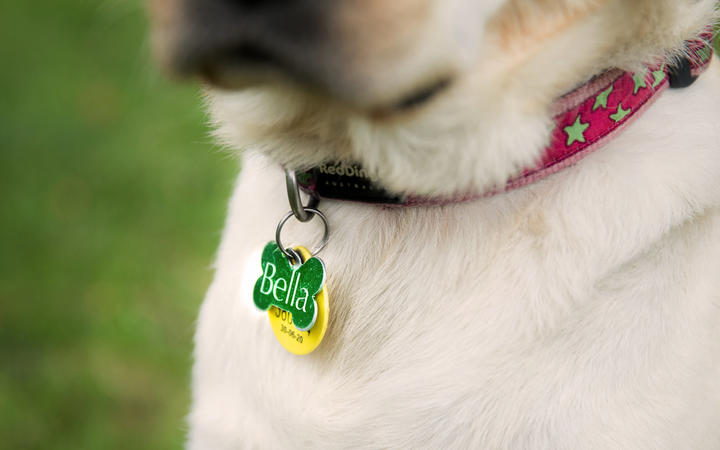 The name is globally popular. It's the most common dog name in the UK and Sweden and in the US, it's topped a list published by insurer VPI since 2009 - prior to that, Max reigned supreme.

The US data, along with a database of the top 100 boys' and girls' names in New Zealand since 1954, suggest Bella's rapid ascent to the top may have been driven by the wildly popular Twilight books and films, which were released between 2005 and 2011.

Isabella was already a popular choice for baby girls, but over the course of the series, Bella shot from 83rd in the rankings to a peak of 26 in 2011, the year the final film was released.

The name is now on the wane among human babies (Bella had dropped to 39th on the list by last year) but maybe the Twilight legacy is a generation of dogs, all answering to the same shoutable, two-syllable name.

Whether the name is here for good or not, Woollaston can't see the nation's love of labradors waning anytime soon. At the moment, she has five of her own, the youngest a six-month-old yellow lab, Keeper, she kept from a litter. "She'll see us out, I should think." The other four are Gwladys, Ursula, Annie, and Ginny. Not a Bella among them.