Plunket playgroups across the country are joining a grassroots initiative that aims to send handmade Christmas cards to people who are alone during the holiday season. 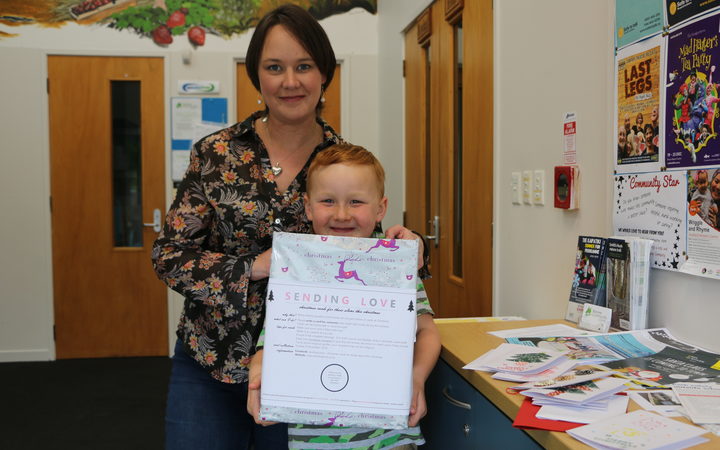 Hannah Rodgers started Sending Love last year after she and her son Jayden decided to make and send a car to someone as an act of kindness. Photo: RNZ / Jessie Chiang

Last Christmas more than 55,000 cards were sent out and the project hopes to include homeless shelters and hospitals this year.

The Sending Love project was started in 2017 by Aucklander Hannah Rodgers and her five-year-old son Jayden Devin-Rodgers.

Anyone is able to make their own cards and then take them to drop off boxes throughout the country.

They then get sent to rest homes and other organisations.

Rodgers has previously told RNZ she never expected the idea to catch on with hundreds of people across the country.

"It is amazing to see the impact the cards have on people," Rodgers said.

"At rest homes, there are people who have very limited contact with their families. Some don't have any family to spend time with at Christmas. Getting a card written with love and care makes a big difference to them - the looks on their faces when they are delivered is priceless."

For the first time, this year children in Plunket playgroups will be teaming up with Sending Love to make their own Christmas cards to send.

Sam Ferreira from Plunket said the organisation was delighted to be a part of the project.

"The Sending Love project connects people in communities and this is something Plunket also aims to do - we work to make sure no whānau or family is left feeling isolated or disconnected," she said.

Sending Love has drop-boxes in about 80 communities throughout New Zealand.