A severe toxic algal bloom has been detected on the Waipoua River, which runs through Masterton - and it won't be helped by recent rain. 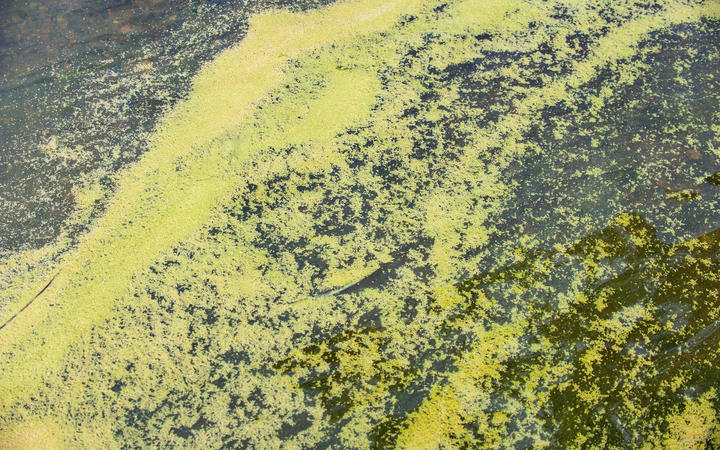 Dogs are at greatest risk from toxic algae because they love the smell of it and will eat it if they can. (file image) Photo: 123RF

People and dogs should not enter the Waipoua River from Paierau Rd to where it meets the Ruamahanga River, Greater Wellington Regional Council [GWRC] said in a statement on Tuesday afternoon.

"There is a severe toxic algal bloom in this area with detached mats building up at the river margins," the statement said.

"Rain forecast for Masterton over the next few days is unlikely to do much to help the situation."

Wairarapa vets said they had not had any cases of dogs with symptoms likely to have come from the bloom.

There weren't any dog walkers out on the river bank or at Henley Lake as a decent rain shower came through on Tuesday afternoon.

A dog walker who had been out on the river at about 9am said there had been a lot of dog walkers out then and they had had no idea of the danger.

Dogs are at greatest risk from toxic algae because they love the smell of it and will eat it if they can.

During a bloom, they must be kept on a leash along the river bank, GWRC advised.

If you suspect your dog has eaten even a small amount of toxic algae take it straight to the vet.

Toxic algal blooms are caused by a combination of warm weather, high nitrogen concentrations and persistent low water flows. They are usually cleared, or flushed, by a period of high rainfall.

The algae grows on submerged river stones in a shiny brown/dark green to violet coating.

It can also become unstable and detach, floating to the surface forming small brown/black mats at the water's edge.

Last year GWRC said the upper Waipoua was not as prone to toxic algal blooms as the urban stretch.

GWRC said it was important to keep an eye on babies and toddlers who may put objects in their mouths. People should seek emergency medical attention immediately if anyone swallowed toxic algae.

"If yourself or others have been swimming in a river or lake and have any of the following symptoms: nausea, vomiting, numbness, tingling, muscle twitches, shaking, or weakness, see your doctor. Seek immediate medical attention for more serious symptoms such as breathing difficulties, convulsions or loss of consciousness."

The council also said the Pakuratahi River monitoring site at Kaitoke Regional Park had 20 percent cover and people were advised not to swim there.

The Hutt River is safe for swimming but toxic algae is starting to build up at some spots. Know what to look for and exercise caution.

Monitoring results from the Otaki and Waikanae rivers are pending and if any concerns are noted they will be shown on the "Is it safe to swim" website.