Kawerau District Council will be trialling three polyethylene speed cushions in an attempt to slow hoons in the town and increase pedestrian safety. 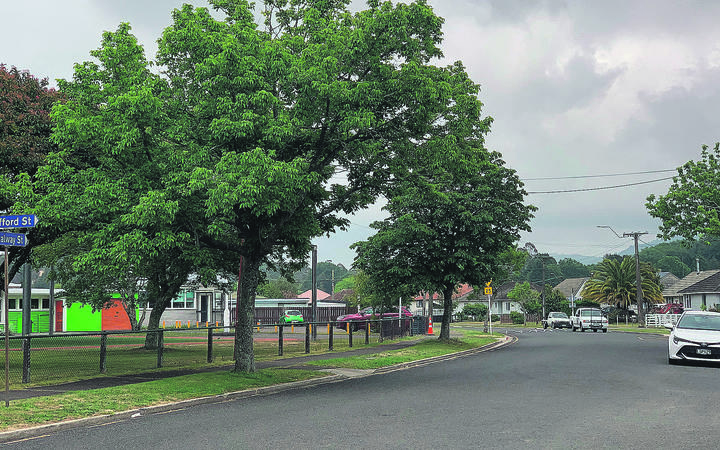 A speed hump with a pedestrian crossing will be installed outside Te Whata Tau o Putauaki kura on Galway Street as the council attempts to make Kawerau streets safer. Photo: LDR / Charlotte Jones

Council staff had originally suggested that 15 of the speed cushions be installed, but councillors raised objections that the proposed locations might not be ideal.

The discussion was held at a council meeting last week.

Two people attended the meeting to complain about the effect hoons were having on their streets.

One woman who lived on Cobham Drive said there were three people racing dirt bikes down her street on Sunday night.

"They weren't wearing helmets and were doing wheelstands as they ripped down the street," she said.

"Where is the police presence?"

A man who lived on Beattie Road said residents there were also having issues with speeding cars, including the local school bus, and racing dirt bikes.

"I have rung the police, but they were a no-show," said the man. "Someone is going to die."

Council operations and services manager Hanno van der Merwe had earlier suggested that the council install speed cushions or concrete speed humps in an attempt to curb the problem.

Mr van der Merwe had recommended speed humps as they were cheaper, could be installed by council staff and were movable if it was decided another location would be better.

A report given to councillors recommended the speed humps be installed at the 15 locations across town.

However, councillors felt this was "overkill" and that other locations should also be considered.

"I don't think we need all these humps," Mayor Malcolm Campbell said.

"To have three in Massey Street is not necessary."

Councillor Aaron Rangihika suggested that a speed hump combined with a pedestrian crossing be installed on Galway Street outside Te Whata Tau o Putauaki kura after he saw two near misses involving school children there recently.

"I know the principal there is really worried and there is no added safety aspect for kids," said Mr Rangihika.

"I really think we need to position one near the school; what's the price of a life?"

Mr Savage agreed there was a need for one near the kura as it was only a matter of time before the "kids get skittled".

Councillors suggested staff prepare a new report on the positioning of the speed cushions before coming back to council.

Mr van der Merwe said he would really like to install some of the speed cushions now to see how they worked and then bring a report back to the council on the rest early next year.

"The one on River Road will take a hammering, and this should indicate to us exactly how hardy they are," said Mr Campbell.

It also noted that the speed cushions would play an integral part in controlling vehicle speeds, but a long-term view should be taken on the installation of permanent traffic calming measures such as chicanes, intersection improvements, mountable roundabouts, raised traffic islands and speed tables.

The installation of speed cushions falls under "minor safety" and is therefore a New Zealand Transport Authority funded activity.