The Crusaders' move to change their logo but not their name avoids the medieval imagery that was the real problem with the franchise's image, a brand strategist says. 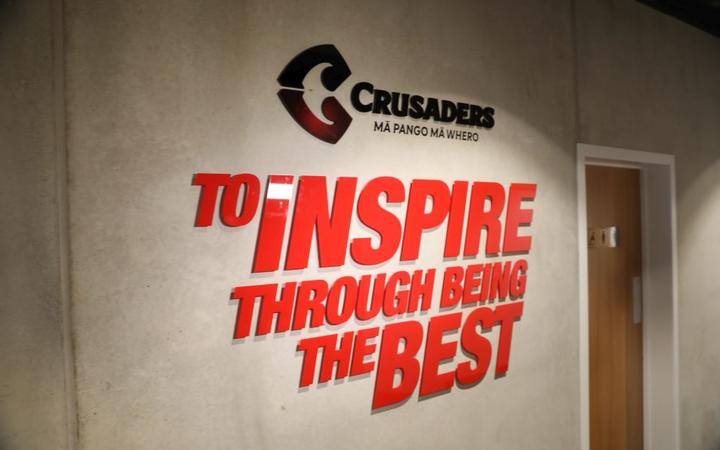 The Crusaders unveiled their new logo for the 2020 and beyond season after a brand review. Photo: RNZ / Simon Rogers

The Super Rugby franchise decided to replace its sword-wielding knight logo after a lengthy review of the team's branding following criticism its swords and warhorses motif were a reference to the religious war crusades about a thousand years ago.

The criticism has persisted for years, but came to a boil after the 15 March terror attacks on two Mosques in Christchurch, the city where the franchise is based.

The man accused of carrying out the shootings, which left 51 people dead, had explicitly referenced the Crusades as a motivating factor behind the attack.

The former logo has been replaced by a red and black tohu in the shape of a stylised letter 'C', and the Crusaders name was retained.

"They weren't going change their name, the name itself is not covered in blood. You know, it's the imagery that was around it that was keeping it back into ... the wars that the crusaders fought."

Ms Brindson said the franchise was smart to keep its fans onside.

Explaining the brand decision after its unveiling yesterday, Crusaders chief executive Colin Mansbridge argued the 'Crusaders' name could be rebranded to focus on leaders fighting for a cause.

"I think of people like Kate Shepherd in Christchurch when I think of the word crusader, I think about Tariana Turia and the way she's described as a crusader for the rights of Māori youth, and lately I've heard people describe Greta Thunberg as a crusader," he said.

"We want to be crusaders that include and unite."

Going into next season the Crusaders will look to slowly roll out more of the messaging behind its rebrand. The new logo is expected to feature on the team's jerseys in 2021.

Mr Mansbridge would not confirm if the horses would be returning to field for Crusaders' home games next year.