The man who pioneered whitebait farming in New Zealand is backing claims that Westport has the potential to be the whitebait capital of the world. 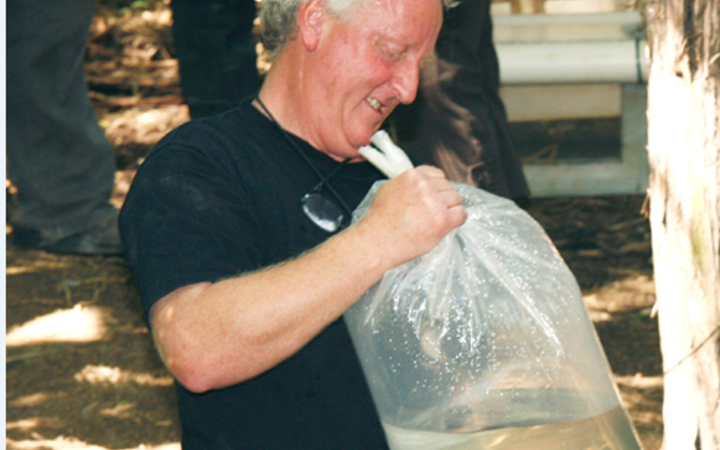 Paul Decker, a pioneer of whitebait farming in NZ, said the proposal for a West Coast whitebait farm is sound and he predicts industry will be as big as mussel farming. Photo: Supplied

The Buller District Council is supporting a bid for government funding for a whitebait farm, by former Greymouth businessman Robert Hutton, who says Westport is ideally placed for the venture.

And Paul Decker, who manages Premium Whitebait in Warkworth north of Auckland, says he is right.

The industry is in its infancy right now but in years to come I predict it'll be as big as mussel-farming in NZ, he said.

Mr Decker began breeding whitebait in tanks at the Mahurangi Technical Institute in Warkworth in 2006, with the aim of restocking local streams.

Over eight years he and his team found ways to breed all five of New Zealand's native whitebait species, including the endangered giant kōkopu.

They were so successful that they were able to start commercial production in 2014. The Warkworth fish farm now employs 12 staff and produces two tonnes of Manaaki Whitebait a year.

The company's investors were keen to expand, Mr Decker said.

"We really need to get up to 100 tonnes, so we're looking round for more land up here at the moment."

They could only look with envy at Westport, he said, where Mr Hutton and his associate Ben Smith hoped to set up a similar operation.

"Westport would be the perfect location for a farmed whitebait set-up. You need access to clean freshwater and seawater for the tanks as well as land to build on because it's an entirely closed operation. Westport has all that in abundance."

Buller would not become whitebait central overnight, he warned.

"It takes millions of investment dollars and time to build up your breeding stock. You can't take the adult fish from the wild because they're protected; you have to breed them up from bait and wait a couple of years till they can breed themselves."

After five years of doing just that, the Warkworth operation now has close to 100,000 giant kōkopu cruising around in its tanks, and apparently thriving in captivity.

"That compares with the estimates of only 20,000 to 80,000 of that species left in the wild. And we have to throw away millions of eggs because we don't have the space to farm them."

Farmed whitebait had been fetching $100 per kilo, Mr Decker said.

"I'll probably be caned for saying this but it tastes even better than the wild stuff. They're killed instantly in an ice slurry rather than suffocating in a net or bucket so they don't get a chance to deteriorate and lose any of their flavour."

The growing fish are fed on pellets imported from Japan, whose main ingredient is shrimp shell and as adults they feast on meal worms fed on bran and raised at the Warkworth plant.

"The food conversion factor's good - for a kilo of feed you get a kilo of whitebait, and we could ultimately be producing all our own feed, as the industry expands."

"It's the smell of the adult fish in the rivers that attracts the whitebait out at sea to head for the freshwater.

"We found when we cleaned up the streams around Warkworth and released the kōkopu, the bait came back within weeks. So the farms can play an important role in protecting the species in the wild."

Former Greymouth businessman Robert Hutton built and designed the Warkworth whitebait factory along with Mr Decker, and now runs his own fish farm in Hope near Nelson.

Mr Hutton's company NZ Whitebait Ltd has applied for a loan from the Provincial Growth Fund to build the $14 million Westport plant.

The fund can lend up to half the capital needed and investors are waiting in the wings to take up shareholdings if the PGF loan was approved, he said.

"It's crucial that we have a supportive stance from local government on the coast for that to happen and I thought we got a pretty good hearing from the Buller council when we pitched the project to them last week. I felt we had a lot of friends at that table," he said.

The council has confirmed its support for the proposal.

A spokesperson for Regional Economic Development Minister Shane Jones, who has been vocal in his support for aquaculture, said the Westport whitebait farm proposal was now under assessment by officials.