The mayor of Grey District says businesses and residents will be relieved that a major road in and out of Greymouth is now partially open. 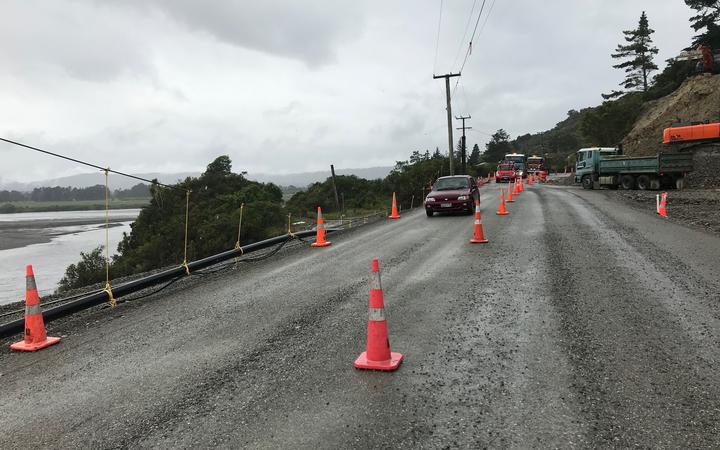 State Highway 7 at Omoto is now open with one lane. Photo: Supplied / NZTA

The New Zealand Transport Agency (NZTA) said State Highway 7 at Omoto, that has been closed by a slip for weeks, was now open to one lane.

Traffic has been diverted through alternative routes and rail services have been halted, which has had a significant impact on the TranzAlpine service to the West Coast as well as freight.

Kiwirail said train services were also due to resume later this week.

NZTA maintenance contract manager Moira Whinham said the road re-opened to one lane last night, meaning road users no longer needed to take the Taylorville detour route, but they should expect short delays as the highway through Omoto was just one lane.

She expected it to be under traffic signal management for some time.

"They've done some amazing work there and they weren't expecting to have the road up and running until tomorrow, so they got that done early."

Ms Gibson said news that train services could be back up and running this week was also ahead of expected.

The landslide over the road at Omoto on the West Coast. Photo: Supplied / NZTA

She said some businesses had suffered large financial losses as a result of the disrupted access.

Dobson Challenge service station manager Taranjeet Singh said the closure of the highway, which was two kilometres up the road from his store, had led to a 50 percent drop in profits compared to the same period last year, he said.

Ms Gibson was seeking government money to support businesses that have been left struggling since access was disrupted.

"People have been really suffering so we have put that package to the government, and we're really trying to advocate on their behalf, to try and get them some relief.

"One business that I talk to last week was down $70,000 this month, compared to the same time last year, so for a small business that's just heart-breaking."

Group operations officer Todd Moyle said work was ahead of expected and if all went to plan, the first trains would start services again later this week.

He said safety remained a priority and stability checks would have to be fully approved before passenger trains could cross the slip.