A Christchurch resident is distributing mischievous fake flyers to sabotage the reputation of the city's biggest high-density home builder. 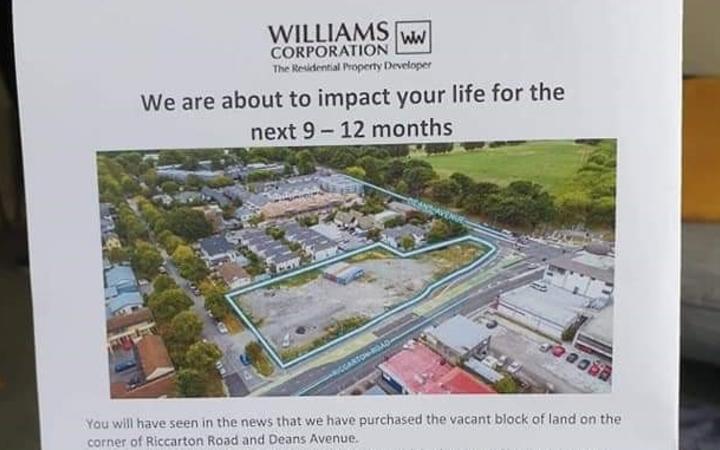 Fake flyers purporting to be from Williams Corporation have been distributed in Christchurch. The company says they contained false statements and has reported the flyers to police. Photo: RNZ / Katie Todd

It has prompted Williams Corporation managing director Matthew Horncastle - who said he had enough of the "criminal and upsetting" practice - to put up a $4000 reward for information about the person responsible.

Neighbours to three Williams Corporation developments have received the flyers - purporting to be from the company but making outrageous claims - over about six months.

They are complete with a watermark, website link and photo of the section, and appear to be alerting neighbours to possible disruption from the Williams' Corporations' next housing project.

The body of the text includes statements that Mr Horncastle said were rude and false.

"You'll have seen the news that we've purchased the vacant block of land on the corner of Riccarton Road and Deans Avenue. This is a developer's dream come true and is going to be a huge win for us, from which we'll profit," one reads.

It thanks the council's resource consent manager for approving the plans "even though we've pushed beyond the limits of the district plan again".

"I guess having close ties with the mayor and a strong team of lawyers ... helps us get what we want," it continues. "Preparing the site involves the use of heavy diggers and earthmoving machinery. This machinery is noisy and your property is likely to shake while work is being done."

After trying to ignore the flyers, Mr Horncastle decided to report them to police this week and offered a $2000 cash reward for anyone who could identify the culprit. Upon speaking with RNZ, he upped that reward to $4000.

He said he had some suspicions but also believed in innocent until proven guilty.

"There'll be someone that has a home security system and there will be proof of who's doing it. When I get that proof - which I will get - I'll name that person and I'll make sure they get held accountable for their actions both in the media and with the full extent of the law."

The Williams Corporation is not a stranger to public dissent, with its developments stirring up anger since early last year from people who say they are too high-density with not enough parking or landscaping.

The company has also copped flak for so-called disruptive construction practices and their interactions with neighbours, which prompted a terse open letter from the former deputy of the Linwood-Central-Heathcote Community Board Jake McLellan this year.

Mr Horncastle said any criticism of Williams should be levelled at the city council's district plan because the Williams Corporation was building as per those rules.

That's exactly what Jake McLellan is focusing on, after being elected to the council.

"The people in my community know I've never been the biggest fan of the William's Corporation but for me now as a city councillor, what I'm focused on is the substantial changes to the district plan that needs to happen to minimise the harm that such poorly planned developments do to our communities," Mr McLellan said.

Mr Horncastle said despite some negativity it was clear there were plenty of people excited about the company's developments, with 150 people messaging in expressions of interest a day.

He said it was disappointing to have to stop and give attention to the individual delivering the malicious flyers.