Gang-related incidents in Napier on Sunday have left two people injured and a medical centre sprayed with what appears to be shotgun pellets. 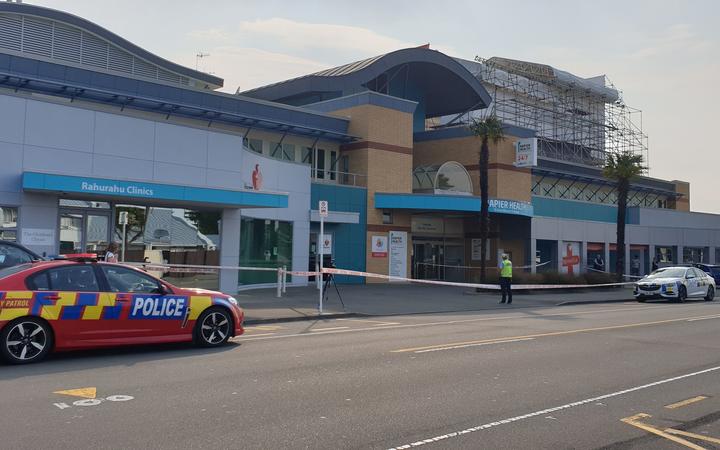 A police car outside a medical centre in Napier. Photo: RNZ / Anusha Bradley

A shot was fired at City Medical at the Napier Health Centre on Wellesley Road about 7.30pm yesterday, which is understood to have involved a conflict between Black Power and Mongrel Mob gang members.

"Everyone had left the scene by the time police arrived. Nobody was injured in the incident. There was a report of a gunshot potentially being heard and further enquiries are being carried out today," a police spokesperson said.

Police guarded the scene overnight and a scene examination was under way this morning.

The health clinic was open today, though part of the forecourt was behind a cordon and one of the walls appeared to have been sprayed with shotgun pellets.

It was just one of a series of gang-related incidents in the city yesterday. At 3.15pm the police were called to Anderson Park following reports of "a number of men" fighting. It is understood this also involved Black Power and Mongrel Mob members.

One person was injured during this incident and was transported to hospital. The injury was not life-threatening, police said.

About 6.10pm, a gang member was struck by a car in Geddis Avenue, sustaining minor leg injuries.

Later in the evening, a gang member presented at the Wellesley Road medical centre with a stab wound. The injury was not life-threatening.

It was then that police were called to the medical centre, where a shot had been fired towards a number of gang members who had gathered outside the centre.

Hawke's Bay District Health Board, which runs the health centre on Wellesley Road, confirmed there was a "disorder incident, that appeared to be gang-related" at City Medical on Sunday evening.

"No staff were harmed or injured. The DHB is working closely with police, who remained at the health centre overnight to provide reassurance," its spokesperson said.

Detective Inspector Mike Foster, district crime manager, said: "Police want to assure Napier residents that we share their concern about these types of incidents in our community and we are working to identify all those involved.

"We take any incident involving the potential use of firearms or other weapons extremely seriously. It is fortunate that no innocent members of the public were injured in any of these incidents.

He said residents may notice a heightened police presence as police carried out enquiries into the incidents.

"We would like to hear from anyone who witnessed any of these incidents, who has not yet spoken to Police, or anyone who has information which could assist our enquiries," he said.

Napier's Mayor Kirsten Wise said she was shocked and saddened by the escalation of violence.

She said the council was supporting the police and community agencies as they carried out their investigations into the incidents.