A holiday to New Zealand last year for a Chinese born Swiss couple ended with one dead, and the other now on trial for murder. 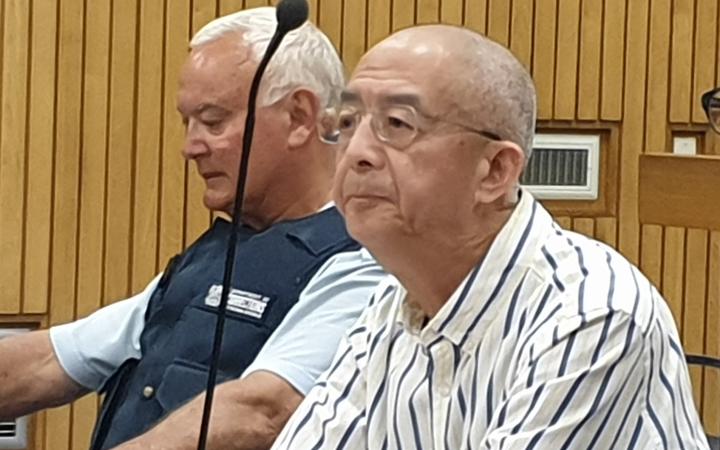 Bin Jiang's defence said he did not intend to kill her his wife. Photo: RNZ / Tracy Neal

Bin Jiang, 64, is accused of murdering his wife, Yanyan Meng, who was found dead at the city's Rutherford Hotel in April 2018.

Mr Jiang, who has been in custody since, was said to have killed his 62-year-old wife during an argument over accusations he was having an affair.

The defence said he panicked, and did not intend to kill her.

A guest at the hotel said she was woken by persistent thumping coming from the room above.

Elizabeth Brandt told the High Court in Nelson today the noise above her at 1.30am sounded like children jumping on and off a bed.

She was not troubled as hotels were "notorious for things going on in rooms", and neither had she heard any voices that might have raised the alarm.

"It was a loud, persistent thumping that went on for about five minutes, and then it stopped, and then it resumed but it was a lot more gentle."

Police were called several hours later when the couple did not meet their tour group as scheduled, and Ms Meng's body was discovered in the room.

Police and medical evidence revealed there were marks and abrasions on Mr Jiang's face, neck and shoulder area after he was taken to hospital, in what appeared to be an intoxicated state.

He had taken a quantity of valium and sleeping pills.

A staff member at the hospital's emergency department, Monica Rae, told the court she was shocked when Mr Jiang said he had killed his wife when she was asked to explain to him why he had been detained.

Mr Jiang, a computer engineer who worked at a Swiss bank on computer design systems, and his wife - a German language expert - was close to her family in China, her brother told the court.

Ming Meng, a police prosecutor in China's Hubei province, said through an interpreter their father, now in his 90s, was a veteran of the Sino-Japanese war and had later become a civil servant.

Mr Meng last saw his sister when she visited China, several months before her death. They also stayed in touch by phone and via the WeChat messaging app.

"When she had difficulty in her life she would contact my two younger brothers, and would also call our parents to tell them about her life.

"When she had good news to share she would use the group chat but other times she would talk to me only one to one," Mr Meng said.

He said she also shared photos of the holiday to that point and then on the night before her death, photos of a woman she accused her husband of having an affair with, plus screenshots of text messages between the pair.

Mr Meng said he told her to calm down, and that "being angry will make you lose your judgement".

Over the next half hour, he was in regular touch with his sister, who he advised not to talk about the affair he described as "just flirting via WeChat".

"I said 'be sure to control your emotions stay calm, don't talk about it everywhere, and others won't know if you don't talk, because you will lose face if you do'.

"'The stuff at the moment can't prove anything - (he's) not young anymore and won't be able to do much, but if you want to separate can you get his money'," Mr Meng told the court through the interpreter.

He also said a divorce would mainly benefit Mr Jiang and the other woman.

Mr Meng denied the suggestion from defence lawyer Tony Bamford that his sister had not had a good relationship with Mr Jiang's family.

Mr Bamford said messages Mr Meng received from his sister, suggested Mr Jiang's sister and possibly his mother had introduced the woman to him.

Mr Meng did, however, agree with Mr Bamford's statement that there was a sense his sister was angry about her husband's family having introduced the woman to him, which was the start of the affair.

"My overall thought was to have my sister calm down and think about her son and family," Mr Meng said.

Ms Meng's ashes were returned to her family in China last June.