Grace Millane told a friend she "clicked" with the man accused of murdering her after a Tinder date, a court has heard. 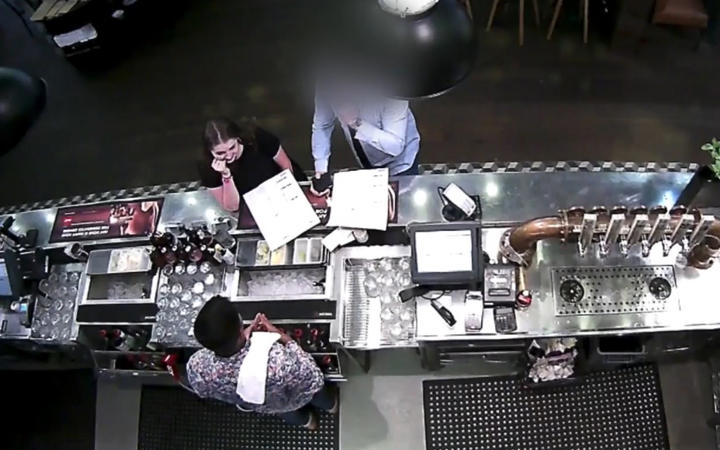 Grace Millane and the defendant began their date with drinks at Andy’s Burgers and Bar in SkyCity. Photo: Supplied

Warning: This story contains details that may be distressing to some readers.

The British backpacker met the 27-year-old, who has name suppression, in Auckland's CBD on the eve of her 22nd birthday.

The Crown says the man strangled Ms Millane in his apartment while the defence says she accidentally died after the pair had consensual rough sex.

The jury have now watched two hours of CCTV footage which filmed the pair bar hopping and clearly enjoying each others company for three to four hours.

Both Ms Millane and the defendant drank heavily throughout the evening and by 9pm they were seen kissing and embracing in The Bluestone Room; the last stop before the pair entered the defendant's CityLife apartment at 9.40pm.

This afternoon the jury heard Ms Millane was messaging Ameena Ashcroft, a university friend in Dubai, on Facebook during the date.

Her evidence was read aloud to the court by Crown lawyer Litia Tuiburelevu.

Ms Ashcroft told police Ms Millane sent her a message that night telling her she was on a date with a guy and about his job.

"I was a bit concerned but I didn't show Grace that I was. I had just got back from a 20-hour flight and I was tired. I feel like I wasn't thinking clearly myself although I thought something seemed out of place."

Ms Ashcroft said Ms Millane then messaged her "cocktails all round" and "he was like 'it's birthday tomorrow we are getting smashed'".

"The last message rang alarm bells for me because I read the message to mean that this guy was saying it was his own birthday and I thought here he was spending it with someone who is a stranger to him, meaning Grace," Ms Ashcroft said.

She told police it hadn't occurred to her that Ms Millane was referencing her own birthday, but she expressed excitement that her friend was on a date with a businessman.

Ms Millane told her friend the date was going 'really good' and that he lived in a hotel, the court heard.

Ms Ashcroft said she could tell Ms Millane was drunk because she was making typos and kept telling her how much she missed and loved her.

"Grace would send I love you messages sober but she wouldn't express it to this degree unless she was tipsy or drunk."

The court heard Ms Ashcroft sent a number of short replies to Ms Millane, including 'you have to go to his apartment in the hotel', 'bet it's like the top floor' and 'I love you too'.

Ms Millane replied 'he is coming to London next year' and 'literally I click with him so well', before telling Ms Ashcroft she would let her know what happened the following day.

Her last message to her was that out of everyone at Lincoln University, the college where they met, Ms Ashcroft was her "fav".

"I sensed Grace was having a good time and she seemed to be drunk and really enjoying herself. I do not think Grace had any concerns for her safety when I was in contact with her. I did not receive a reply or hear anything further from Grace."

"Grace was incredibly honest and she had a strong belief in being honest and having honest friendships with the people she was close too.

"Grace did not care about what someone's job was or anything materialistic. She would like someone for who they are; not what they say they have or how much money they expressed that they earn."

Ms Ashcroft said her friend had told her about dates and her interest in foreplay before but never mentioned an interest in rough sex practices.

"Grace never met someone with the intention to sleep with them. It's an intimate thing for Grace to sleep with someone. Grace would have to be quite trusting and happy with that person."

The court has heard the defendant watched pornography and took seven explicit photographs of Ms Millane's body in the early hours of 2 December.

He also Googled 'hottest fire' and 'Waitākere Ranges', where the British backpackers body was later found buried in a suitcase.

In his opening address, Crown prosecutor Robin McCoubrey said the man also went on a Tinder date with another woman as Ms Millane's body sat in the suitcase in his apartment.

Mc McCoubrey told the jury it could rely on what he did afterwards in determining what his intent was when he strangled Ms Millane.

Bu the man's defence lawyer Ian Brookie argued his client's actions were of little value to the jury's task of deciding intent.

He said Ms Millane's death was an unforeseen consequence of rough sex where the defendant had applied pressure to her neck with her consent and encouragement.