The man who assaulted Green Party co-leader James Shaw has been sentenced to nine months in prison. 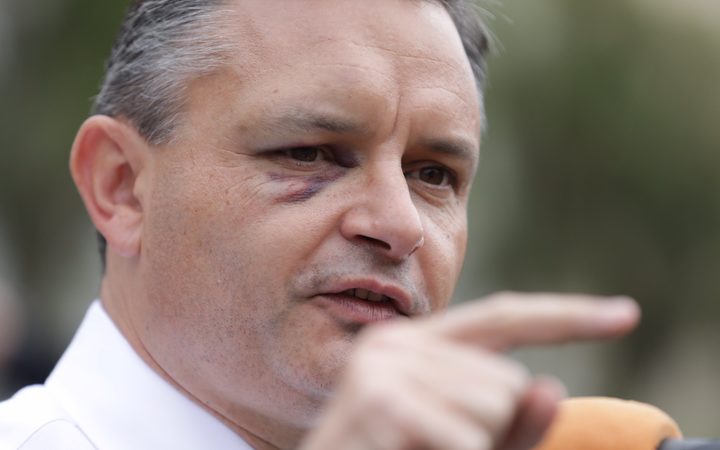 Paul Raymond Harris, 47, was found guilty in May of punching Mr Shaw repeatedly in the head on 14 March as the MP walked to work.

His lawyer, Marty Robinson, asked for community service and supervision, despite a probation report recommending prison time because Harris appeared to have no remorse.

Harris had previously said he did not want a home detention sentence, because the electronic monitoring bracelet would cause his wife, who was pregnant, stress and anxiety.

Mr Robinson said Harris had now changed his mind after realising that prison time would be stressful for his family too and would impact on them financially.

Judge Ian Mill said Harris' decision to oppose home detention was an "ill-judged effort" to protect his wife, and based on the probation report he was unwilling to delay sentencing to consider it.

He also said given the seriousness of the assault, community service was inappropriate.

Harris had previously told the court he was overcome with grief following his wife's miscarriage two days previously and wanted to talk to Mr Shaw about his party's stance on abortion.

However, Judge Mill said Mr Shaw had no idea that was what he was concerned about because he started talking to Mr Shaw about beneficiaries and the United Nations.

When Mr Shaw tried to walk away, Harris punched him five or six times.

Harris had "fixed ideas" about abortion and while he did not have any mental health issues, his personality had contributed to the attack, Judge Mill said.

He referred to a psychiatric assessment in which it was noted a number of people commented on his "rigid personality".

"They've commented on, in their view, your rigid, overvalued ideas and belief system and the inflexibility of your thinking - but none of them have come to the view that you have a mental disorder."

However, Judge Mill said the same report did go some way in proving Harris was remorseful.

"You did say to the doctor that you were sorry. You had an ability to reflect on how it might have been for your victim and that Mr Shaw was entitled to his view as you were entitled to yours."

Harris interrupted twice while Judge Mill was summing up.

Judge Mill was making the point that Mr Shaw, like any other citizen, was entitled to walk down the road without being assaulted, and deserved to be protected by the law when Harris questioned the rights of "citizens who had lost their lives [via abortion] each day".

He also interjected when Judge Mill was discussion a reduction of sentence, based on Harris' guilty plea, saying he did not want a reduction.

In a victim impact statement from Mr Shaw read out by the Judge, it stated during the attack he "just didn't know when the hitting would stop", and this made him very anxious.

It also said the attack and the resulting media attention had caused his family and his staff distress.

Harris was handed a 12-month sentence, but this was reduced to nine based on his early guilty plea, remorse and previous good character.