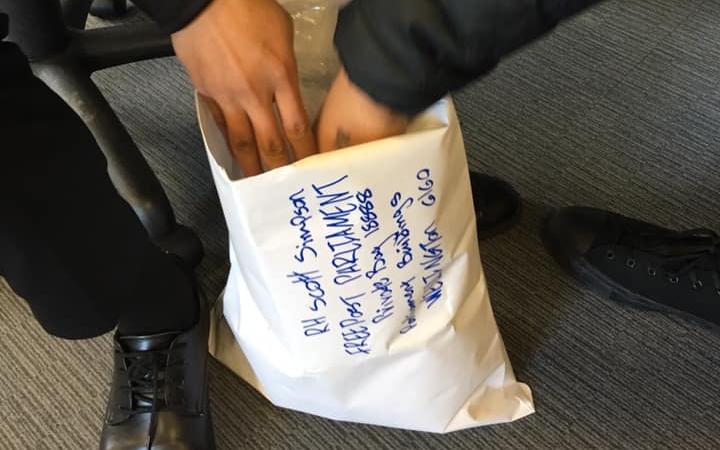 National's environment spokesperson Scott Simpson said the beautifully wrapped parcel was "kind of fun" but campaigners would be better to talk to businesses. Photo: Plastic2Parliament/Facebook

More than 500 people have joined the 'Plastic 2 Parliament' movement demanding politicians put aside party politics to reduce single use plastics through legislation, bans and levies.

They are focusing on one politician every Monday, by making use of the parliamentary freepost.

Organiser Wade Bishop of Christchurch said the catalyst for him to take action was seeing an individually plastic wrapped corn cob.

Observing just how much plastic packaging was on supermarket shelves - including that corn cob - made him realise "consumer choice" and recyling promotion alone could never solve the single-use plastic problem.

With packaging making up about a third of all single-use plastic, and oil companies aiming to increase their plastic production dramatically, he said the answer had to be legislation.

"So we're asking politicians to put aside party politics and deal with what's driving this problem," he said.

The number of people in the Plastic 2 Parliament movement has ramped up over the past two weeks. Mr Bishop said his dream would be to have 30,000 to 40,000 people on board.

On the receiving end of the parcel of bread bags, bottle caps and pie wrappers in the first week was Labour's Environment Minister David Parker.

This week, about two dozen parcels landed in the inbox of National's environment spokesperson Scott Simpson, who described it as positive and "kind of fun."

He said his initial reaction was to marvel at how beautifully wrapped the parcels were, but he didn't need to be sold on the message of plastic reduction.

"I do think that we do have too much plastic in our lives. But really, this is an issue that would be best addressed by talking to the manufacturers, the retailers, the businesses that put products in plastic, and directing it to them," he said.

He said he'd also like to see plastic parcels being sent to Associate Minister for the Environment Eugenie Sage.

"She is responsible for plastic waste minimization and so far this is the government that's talked a big game on the environment and delivered very, very little"

But Mr Bishop said Mr Simpson's government had done "zip" for nine years, and he evidentially hadn't read the letters sent with the plastic demanding that he put party politics aside.

If the movement took aim at the businesses, he said, there would be "hundreds and hundreds" to work through.

It made more sense to him to let the MPs know they were on notice.

"It might fizzle out. It might just end up with me, an angry man sending too many parcels to parliament," he said. "But at least it's doing something."

They are also asking for their parties to make plastic waste minimisation a priority.

Mr Simpson said the plastic parcels were still sitting in a mail bag in his office but he would make sure they went into the Packaging Forum's soft plastic recycling programme.