Hundreds of Napier residents have complained about their recycling not being picked up following a dispute between the council and its contractor over the collection of new recycling bins. 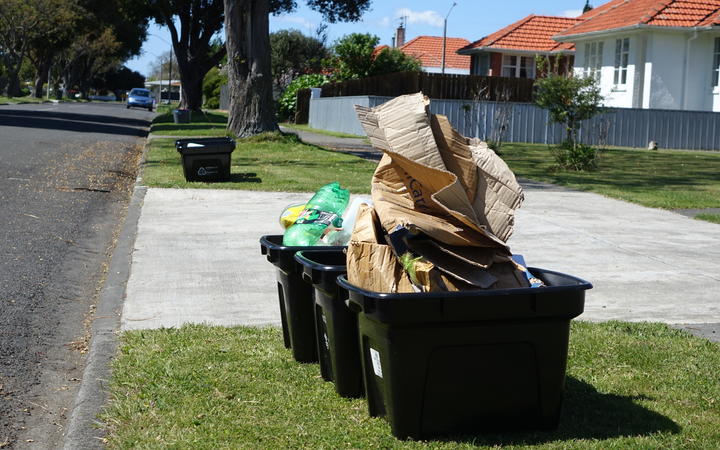 Hundreds of Napier residents have complained about their recycling not being picked up. Photo: RNZ / Anusha Bradley

Green Sky Waste Solutions has a contract until the end of the month to pick up kerbside recycling once a fortnight. From 1 November, Smart Environmental will take over the contract, collecting recycling every week.

In anticipation of the new contract, each household has been issued with three new black bins to use from next Friday.

But some residents - and in some places whole streets - had been putting them out before the changeover, causing frustration for Green Sky.

"The additional collection resources required to meet this sudden increase that had not been planned for," Green Sky chief executive Friederike Lugt said.

"The degree of obvious enthusiasm for the new system has unfortunately caused a number of hiccups to the smooth running of our current operations, causing frustrations not only for our collection teams but also the public and Council.

More than 550 calls and 82 emails relating to kerbside recycling were made to Napier City Council between 1 October and 17 October, with the majority complaining about their recycling not being picked up by Green Sky.

The numbers did not include after hours calls, calls directly to the depot, the requests for help or hundreds of comments on the council's social media pages, Napier City Council said.

Both Green Sky and the council said a resolution had since been found.

"Council expects all recycling to be collected as usual by the current contractor, until 31 October," the council said.

Green Sky encouraged Napier residents to wait until 1 November to use the new black bins.

"Green Sky hopes that any confusion around the start date of the new service doesn't detract from what is set to be a fantastic improvement to Napiers residential recycling," Ms Lugt said.

Green Sky did not bid for the new contract when it went to tender earlier this year.