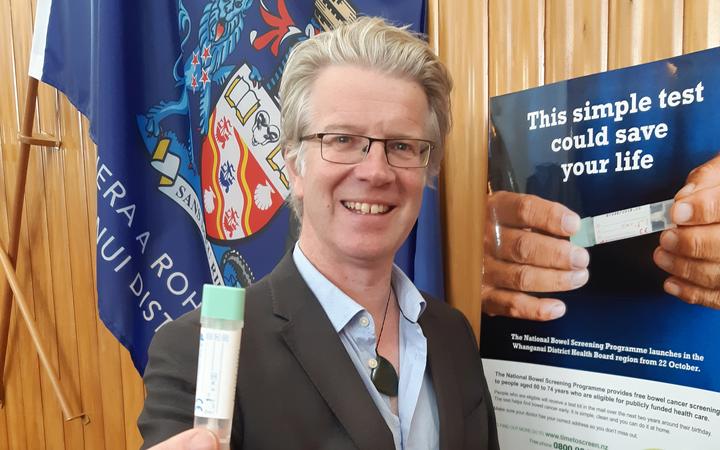 Twelve thousand of them live in the Whanganui District Health Board area, which will join the national screening programme tomorrow.

Neighbouring MidCentral DHB is likely to follow next month - setting a halfway milestone for a carefully managed programme that some worry is already stretched.

Since the long-awaited programme began in mid-2017, 180,000 people between the ages of 60 and 74 have been offered screening for bowel cancer.

Since then, 400 cancers have been found and hundreds of polyps removed which could have become cancerous in time.

The extension to Whanganui and MidCentral is a landmark in the rollout, the Health Ministry's National Screening Unit group manager Astrid Koornneef said.

"Nearly half of the population that is eligible for screening in future will be on the programme and receive invitations, and so for us this is a really important milestone and we're very excited to get to this position," she said.

Both DHBs were scheduled to begin screening now, but they will be doing so under an interim software system, rather than the planned National Screening Solution, or NSS.

That was expected to be ready in March this year but is now not expected to underpin screening until March next year.

Astrid Koornneef said more development was needed for the NSS.

She added that the interim IT system has received a robust upgrade and it can manage all the patient and other data associated with the two extra DHBs.

"We have done [an] extensive assessment of its readiness to take on two additional DHBs, and that is only about another 3 percent on top of what we already using the system for. So it's a small amount and with the work we've done we are confident that it's fit for purpose," she said.

Medical specialists back screening and want to see the current progressive rollout - which will take until June 2021- proceed as planned.

But screening, with greater public awareness about bowel cancer, has led to a 45 percent increase in the number of diagnostic colonoscopy procedures over the past five years.

The immediate past president of the Gastroenterology Society, Michael Schultz, said more people are needed to provide the colonoscopies.

"How many are we short? I think 50 is probably a good number. If we would find 50 more people who can do endoscopies that would certainly help this country a lot."

Dr Schultz said more will have to be done to find the necessary specialists and others.

"New Zealand has one of the highest rates of colorectal cancer in the world. Everybody knows that and I think the facts speak for themselves how many cancers are being found through the screening programme. We just have to work smarter with our resources until we can increase the workforce."

The ministry said it understands the workforce pressure and is working with others to address it.

It is also urging the public in districts which are coming up for two years under screening, such as Wairarapa and Hutt Valley, to be sure to participate in the second round of screening, even if they were negative the first time. This was because some cancers do not bleed all the time and because cancers may develop between tests.

Whanganui DHB said it's delighted to be joining the national rollout of the free screening programme.

A DHB spokesman, Mark Dawson, said: "This programme has particular significance for the Whanganui region with our high Māori population which will be one of the key targets for the free testing."

Mr Dawson added the DHB has the backing of the Whanganui Mayor, Hamish McDouall, who lost a close friend to bowel cancer, and also strong support from other health providers in the region.

Tairawhiti DHB will be first to screen under the new IT system, in March, followed by Capital and Coast, Canterbury, South Canterbury, Northland, Auckland and Waikato next year. Bay of Plenty, Taranaki and West Coast will follow in early 2021.