Some cyclists are travelling as fast as cars on Auckland's Northwestern cycleway where a walking school bus had to be suspended. 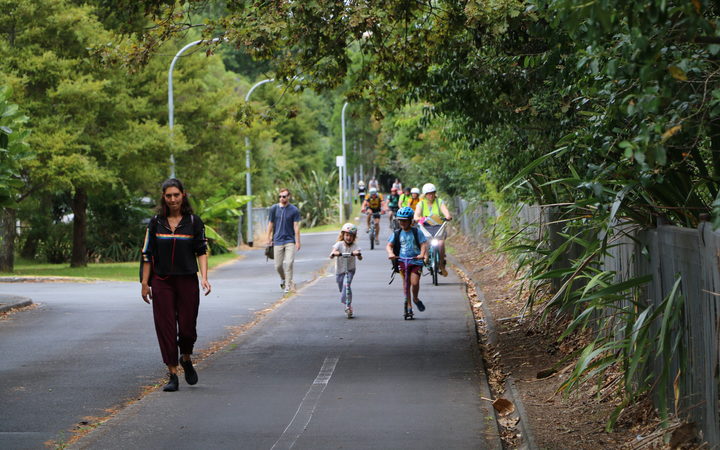 Auckland Transport spent two months measuring speeds after Newton Central School canned its walking bus because of near misses and abuse from cyclists.

It took data from two points - at Hesketh Street, a busy point for pedestrians and cyclists near the school, and further west near the industrial Rosebank Road.

The fastest 12 times recorded at Hesketh Street were all about 50km/h.

But that went down to about 40km/h citybound - probably because of a slight uphill slope.

At the flat stretch near Rosebank Road, where there were far fewer pedestrians, the fastest times in both directions were between 50km/h and 60km/h.

But the single fastest speed was about 80km/h - recorded once city-bound and once west-bound on the same day.

AT's Cliff Wilton said the data did not show what type of vehicle recorded any speed.

"At those speeds it could potentially be somebody on a motorbike which would then be an infringement issue and something for the police. I'm pleased to see that it's an outlier and not a common occurrence," he said.

Hesketh Street resident, Kirsty, said the cycleway speed figures were no surprise to her.

"We come out of our gate and we turn onto the cycleway and a couple of times the kids have had to pull back because someone's come flying past," she said.

She most noticed the speed from e-scooters and e-bikes - possibly because you could usually hear them coming, she said.

But the owner of the Electric Bike Team shop, Maurice Wells, said he doubted the fastest times recorded would be from an e-bike.

Most sold in Auckland had a maximum assisted speed of 30 to 35km which meant they could only go significantly faster with a helping hand - like a downhill slope, he said.

"My best guess would be a motorbike, a motor scooter or a non-legal electric motorbike... Maybe some elite bicycle riders at six in the morning with a tail wind," he said.

AT was still processing the data so only released the top 12 speeds to RNZ, along with figures showing more common behaviour.

The top speeds could technically be the same person, Mr Wilton said.

But data on the cycle and run tracking app Strava also showed the fastest road cyclists reach 50km/h-plus along the cycleway.

The AT figures showed most people were considerably slower, with 85 percent travelling under 22km/h an hour city-bound at Hesketh, and under 36km/h on the downwhill slope on the way home.

In the higher speed zone further west, most were under 34km/h.