The last piece of a land jigsaw puzzle has fallen into place for a much-anticipated library and art gallery project in Blenheim. 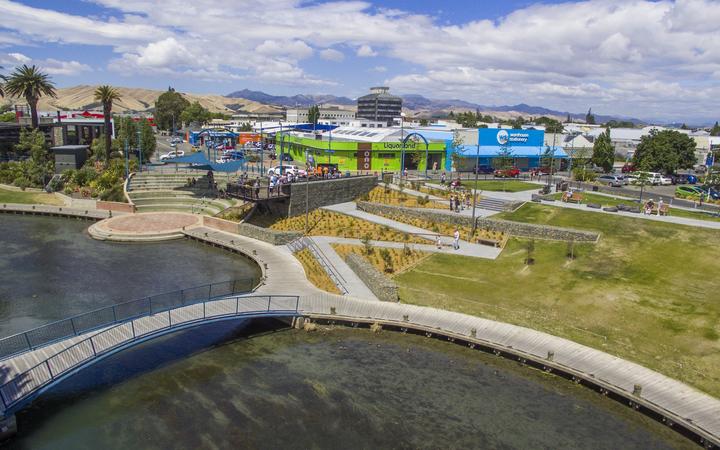 Marlborough District Council has purchased the land occupied by the old Liquorland building, close to the amphitheatre at the end of High St, from the Millennium Art Gallery Foundation Trust.

It comes after the $20 million project, first mooted in 2009, was delayed by water projects, land ownership hurdles and a slower than expected design stage.

Marlborough Mayor John Leggett said the new "stand out" building could be a "game changer" for foot traffic in and around Blenheim's central business district.

"I've always had the vision to revitalise that part of town, which is concentrated around the river area... I see that as quite important," Mr Leggett said.

"I see it as a major part of the [central business district's] development.

"It's a building that's going to be a real stand out. We need to be prepared, with social structures like this, to put in the time, effort and funding into them."

The project made it to the last round of the 2015 long-term plan as part of a $23m revitalisation of the town centre that included the now-completed Quays riverside park, beside the amphitheatre.

But the earmarked funds were instead funnelled into water schemes in Renwick, Havelock and Seddon, where residents could, as of August this year, safely drink from their taps again.

The council revisited the project in last year's long-term plan, and proposed the current library and art gallery be replaced as part of its 'Investing in Infrastructure' plans.

Concept designs were expected to be available for public viewing later this year, but lead project architect Richard McGowan said the two-storey building would face north and take advantage of the "fantastic" view over the Wither Hills.

"The first floor is a shared lobby with a cafe on one side, and a lobby space on the other side. Behind that space is a gallery," Mr McGowan said.

"Then people can go upstairs and see the [Taylor] river and [Wither] hills to the nort... It's a room where people can read stuff and look at the view."

There would be a "clear" distinction between the library and art gallery, but not so much that the two looked "like part A and part B", he said.

"Whether you're a library person or a gallery person, the fact that the two are in the same building means the art gallery might get some foot traffic it might not have got beforehand, and vice versa."

Few load-bearing walls would be built into the 3600 square metre building, which meant it could be restructured internally for decades, he said.

Mr McGowan was part of Christchurch-based architect practice Warren and Mahoney, which was commissioned to prepare the building's concept plan.

The old Liquorland and Warehouse Stationery buildings were expected be demolished early next year, with the tender and construction process set down for two years.

The council would cover $15m of the $20m total, with the Millennium Art Gallery Foundation Trust responsible for the rest.

The trust had already received a gift of $1m from a benefactor, who was responsible for securing the Liquorland site for the council.

Trust chairman Richard Wilson said the new art gallery would be a welcome change to its Seymour St premises, which were at full capacity.

The current art gallery did not meet the national and international museum standards required for the proper care of public art collections, including both storage and display, Mr Wilson said.

He hoped the new build would feature three exhibition spaces - one more than the current public art gallery - so it could host a permanent, rotating exhibit of work dedicated to Marlborough artists.

Exhibitions featuring "rare and valuable works" that were were "previously unable to be exhibited in Marlborough" were set to feature in the new build.

The building would be the "best advertisement" the town could ask for, Wilson said.

"All the traffic going through Blenheim crosses over the Taylor River, and they might look over, and might get off the highways and spend a few hours in the [central business district], just because they've seen that building.

"I think it will take Blenheim to a new level, if done well."

Friends of the Marlborough District Libraries chairman Bobbie Glennie said a new library was "long overdue" and would be "welcomed with relief".

"The present district library has become extremely cramped over recent years, making it difficult to expand and develop services and programmes similar to those now offered by other libraries."