A section of a busy street in Auckland city centre has been transformed to be more pedestrian-friendly. 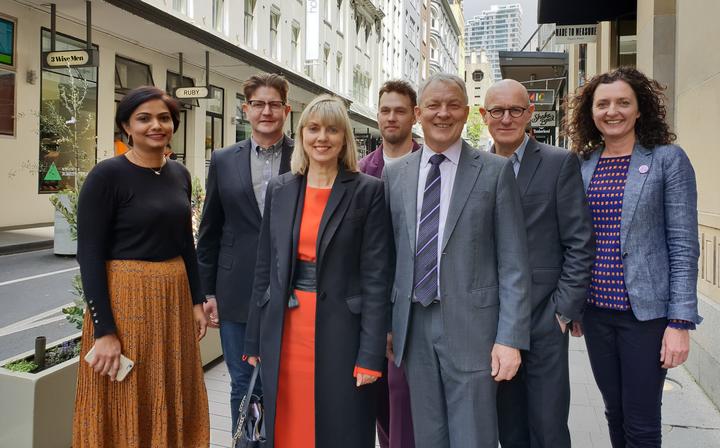 It's a trial phase of a wider plan to make the CBD more walkable, but some businesses are sounding a note of caution about changing the cityscape.

It took only three nights for High Street to be transformed between Shortland Street and Vulcan Lane, with pot plants lining and 13 car parks being replaced with 25-minute loading zones.

There are 60,000 people who call Auckland city centre home and more than 100,000 people travel into the city every day.

Auckland mayor Phil Goff said it was going to make a difference for those who used the street the most.

"You bring your shoulders in to walk down some of the areas of High Street because it's only a metre wide and then you get here, people can go back to being people, and you feel that this is an area that's made for you and not an area that you're dodging the pedestrians and the cars," he said.

A woman, who didn't want to be named and walked along the street every day, said it got crowded quickly and it was good to see the changes.

"I think it would be great to have just pedestrians and no cars any more. It will make it more welcoming I guess."

Martin Lagavale, who often delivers goods on the street, was glad private cars were no longer parking there.

"It's very good for delivery because sometimes we have a private car parked at a loading zone. When the time's coming for loading, it's very hard for me," he said.

Murray Crane - a long-time business owner on High Street - has been involved in developing the pedestrian plan.

He said he's all for it but wanted it to be done right.

"Ultimately, the customers and pedestrians will tell us what they want and how they want it to work properly. I mean change is good if it modernises this street and we don't lose our own identity as a district - that's probably my biggest concern. We don't want to just be part of a homogenised plan for all of Auckland."

Mr Goff said people asked him why not transform the whole street all at once.

"The idea of not doing it now was actually to trial this, to involve people that work, own businesses in the street and visit the street to say have we got the design right. It's a co-designed process. It's inherently democratic."

The second phase of the pedestrianisation trial will run from Vulcan Lane to Durham Lane and was planned to start from February next year.

Feedback from the public on the trial will be taken into consideration.