A Chinese man's mercy drive helped four North Koreans to escape - but also forced him to flee to New Zealand after being tortured by police and harassed by North Korean agents. 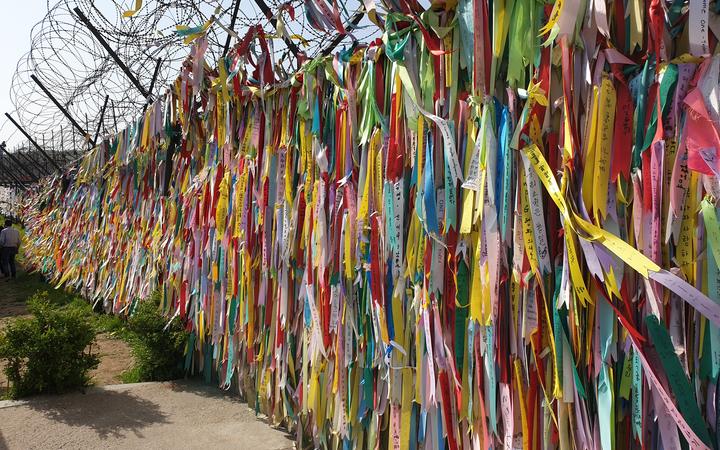 At the demilitarised zone in Korea, visitors leave messages of hope for a reunified Korea. Photo: Gill Bonnett

He drove by back roads all day, all night and all day again to take the group - including two children - 1000km from the border town where he lived.

The Immigration and Protection Tribunal in Auckland heard he became unwittingly involved in the escape bid to begin with, after agreeing to drive a friend's North Korean sister-in-law to a medical centre.

When he arrived he found the group with a child who was very sick, and they asked him to drive them a long way into China.

In its recently-released decision, the tribunal gave him protected person status in New Zealand because of his risk of being detained and tortured if he returned to China.

It heard he was taken in by Chinese police for questioning and released, but men who he thought were North Korean agents followed him.

"Over the next few days, [he] suffered several incidents on the road, in which the North Korean men tried to block him in or cut him off and stop his car. He managed to avoid them each time but they followed him.

"Four days after his first visit to the police station, [he] was again summoned to attend. When he did so, he was treated much more harshly. Initially, he was shackled into a 'tiger chair' in which his wrists and ankles were restrained in positions which quickly became uncomfortable.

"The police did not believe [him] and he was made to squat on the floor for some seven to eight hours, which caused him great pain, particularly in his lower back."

When he was released, his son told him to leave and gave him an air ticket to New Zealand.

In January last year he took several internal flights to an unnamed airport, from where he flew to New Zealand.

He rented a place and his landlord found him a lawyer and made a refugee claim within two weeks of arriving.

His wife was unable to accompany her husband as she had recently been in hospital.

Immigration New Zealand later cancelled her visa, saying her circumstances had changed in light of her husband applying for asylum.

Chinese authorities have since confiscated her passport.

The tribunal heard North Koreans had visited her more than 10 times, with warnings that there was no point in him hiding.

The fate of the North Koreans is unknown.

They are among an estimated 1000 people who make the hazardous escape every year, usually via the border with China.

Human rights groups say if China finds asylum seekers, it returns them to North Korea where they face severe punishment or death. Some women are trafficked into forced marriages.

If they are lucky, the defectors, or refugees, can travel to South Korea.

Families separated by the Korean war and division of the peninsula have not given up on finding their relatives.

Dae Hyeon Park was 17 when he fled North Korea with his mother, grandfather and sister in 2007.

He says the fear never leaves him.

"Most of North Koreans have the experience - the fearing [of] death. So I think I survived from that, I mean 30,000 North Korean defectors are also facing those kind of problems and the fears - even now, every day."

His grandfather was captured during the Korean war and had to work in North Korean mining areas for 50 or 60 years.

Their family in South Korea managed to make contact and they paid more than NZ$80,000 to brokers to make the dangerous crossing into China and later South Korea.

South Korea's cultural reach through K-pop and soap operas has shown some in the north - the ones who run the gauntlet of punishment by watching - what life in the outside world looks like.

But the reality for those fleeing can be very different.

The Hana Foundation in Korea helps those who manage to escape as they struggle to integrate into a very different country to the one they have left behind.

They stand out because of their strong dialects, poor education and short heights, caused by severe malnourishment.

The My JT factory employs so-called defectors from the north - refugees who suffer discrimination despite their shared culture and history.

Its owner does not want be named because of fear of what the regime in the north could still do to her brother, who is still there.

She shared her real name and home town with a client, who subsequently returned to the north. "So if that client was really a spy and exposed everything to the state, her younger brother could be in danger," she said, through an interpreter. 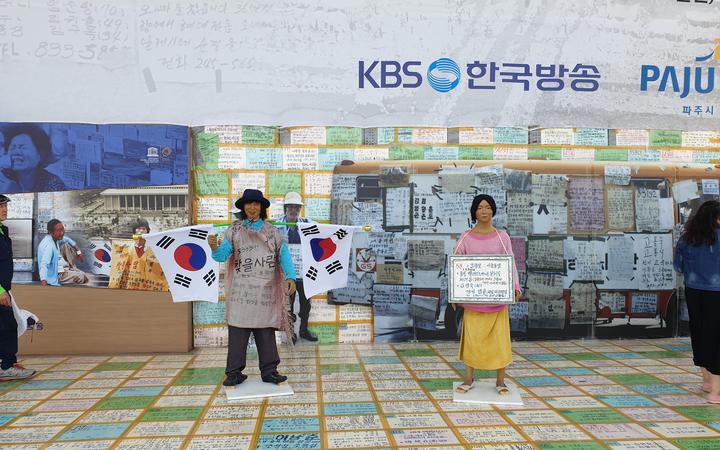 A memorial at the DMZ, with appeals from families separated by the partition of Korea to help find their relatives. Photo: Gill Bonnett

The East Asia Research Director for Amnesty International, Roseann Rife, said conditions in North Korea are dire but for those who successfully reach China, there is not always a happy ending.

"We hear stories of people who actually spend most of their time in hiding, trying to avoid being noticed," she said. "Many of them are trying to move on eventually to South Korea.

"They speak a very distinct type of Korean having come from the north, it's very different from the rest of South Korea. They often find it difficult to integrate and find jobs, and it's a very difficult transition for many of them."

And she said the dangers for those helping them were very real.

"They have been coming under greater scrutiny and being detained and questioned about this transiting across the border," she said.

"And so it is very common in detention centres in China for torture to occur. A lot of the the judicial system is based on unfortunately, confessions, and many of these confessions are extracted through torture."

The decision by immigration authorities in New Zealand to cancel the man's wife's visa was a concern, she said, but it is legally able to do that.

"It is true that the legal rights really only kick in once once a person has left their home country," she said. "But nonetheless, cancelling a visa is a clear decision to stop somebody from coming in.

"We're often talking about retribution. People often hear that their family members are threatened if they don't return back to their home country. So keeping the family separate certainly increases the risk to everybody involved." 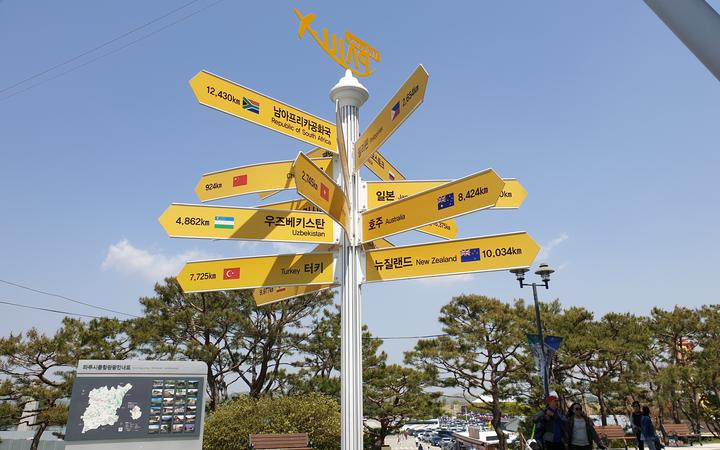 At the DMZ, a signpost to New Zealand. Photo: Gill Bonnett

The man involved declined to speak about his ordeal after being approached through his lawyer in Auckland.

The appeals tribunal that granted him protected person status heard he was struggling with his new life.

He was concerned about his wife and son and wanted to return to China as soon as it was safe to do so, it said in its decision notes.

"[He] has consistently related a detailed and plausible account of being drawn into assisting the North Koreans, and subsequently being investigated about it," the tribunal said. "The narrative is brief in compass, but has been related with a wealth of detail.

"It was evident to the tribunal at the appeal hearing that the appellant is struggling emotionally at being in New Zealand.

"He clearly misses his wife and son and he is concerned at his wife's state of health. He is lonely and isolated in New Zealand and cannot communicate in English.

"He stated several times, with feeling, that he wants to return to China and his family as soon as enough time has passed for the authorities to no longer regard the matter as serious."

The tribunal found the man could be expected to be detained on his return to China and would likely be held in pre-trial detention for some two to seven months.

"During that period of detention, he will be at risk of torture or cruel, inhuman or degrading treatment in an attempt to make him confess," it ruled.

"The use of torture in such conditions is widely acknowledged by reliable human rights monitors to be routine."

Gill Bonnett travelled to Korea through a Jefferson Fellowship at the East West Center in Hawai'i funded by the Asia New Zealand Foundation.