The New Plymouth District Council has paid tribute to four-term councillor Mike Merrick who has died this week after being ill for some time. 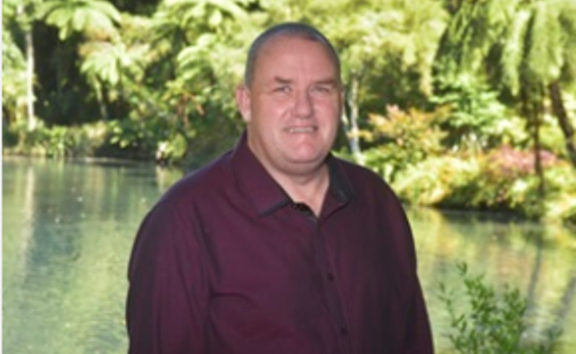 A former police sergeant and manager of the city's Foodbank, Mr Merrick, who was not standing for re-election, was first elected in 1998 and served three terms before surrendering his seat in 2007 and being re-elected in 2013.

Remembered and respected for being his own man and for how difficult it was to read how his vote would fall at the council table, his colleagues set aside time to recognise his contribution to the district ahead of an extraordinary council meeting this afternoon.

Mayor Neil Holdom told the meeting that a mighty tōtara had fallen before recounting his first encounters with Mr Merrick.

"I first met Mike in the mid 90s as a big burly police officer. A sergeant who I found quite frightening as I was a young reporter at the time. He subsequently became an outspoken and well-respected member of the New Plymouth District Council.

"Mike built a career of loyal community service working in a range of sectors including caring for the elderly, his work for the Foodbank assisting our more vulnerable families. And then I got to know him quite closely over these past three years as he came back to council bringing his wealth of experience and a very strong set of personal values and a real commitment to caring for people in our community."

Mr Holdom said Mr Merrick had a great sense of humour and when the 58-year-old was recognised for his service to the community with a Queens Service Medal in the 2019 New Year's Honours List it had come with an added bonus.

"He recalled with much delight how some obscure MP from Timaru, I think, accidentally sent him a congratulatory letter for being Knighted. For that we called him Sir Mike for quite a while."

Mr Holdom said it was always difficult to tell how Mr Merrick's vote would fall at the council table, but once it had it was always worth listening to his reasoning.

He said the councillor would be deeply missed by his council colleagues.

Long serving councillor Gordon Brown said it was appropriate to farewell Mr Merrick in the chamber where he spent 12 of the last 21 years serving his community.

"That's no mean feat and it shows what the community thinks of him and that so many of his former colleagues are here today is a mark of their respect."

Mr Brown read tributes from former Mayor Peter Tennent and former councillors Alison Rumball and Lance Girling-Butcher before sharing a story of his own about Mr Merrick, who was an infrequent visitor to a Friday afternoon gathering of council colleagues and associates.

"He invited us to his house warming. It was a quite exclusive affair there was only the three of us ... and on the invitation there was one other sentence 'and by the way if you're good I'll let you wear my medal - 10 minutes each'. Thanks your worship, and bye Mike."

Mr Merrick was also involved with the North Taranaki SPCA, secretary of the Taranaki Heritage Trust, worked with the Honeyfield Foundation and in his favourite role wrote biographies for the terminally ill for Hospice Taranaki.

The councillor was also remembered by a series of former council colleagues and members of the community before a karakia was said ahead of the resumption of the meeting.