Ruapehu district businesses and health services are bracing for the long-term closure of the main highway between Whanganui and Raetihi. 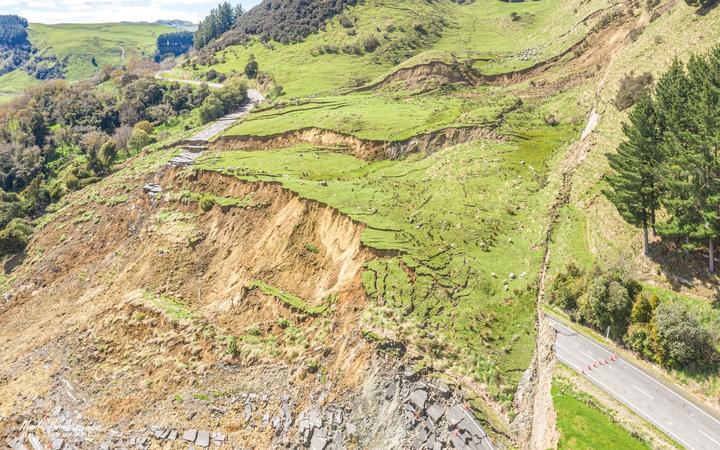 The landslip that has wiped out part of the Whanganui-Raetihi road. Photo: Supplied / Mark Brimblecombe Photography

A large chunk of the road collapsed last week, with detours adding at least an hour to travelling times.

Judith MacDonald from the Regional Health Network said State Highway 4 was a key ambulance route between Raetihi and Whanganui Hospital, and doctors were worried some acute patients in Ruapehu won't make it to the hospital on time.

"That's a two and half hour one way trip now through to State Highway 1, so we anticipate the helicopters will be used for acute emergencies and the ambulance will take road traffic as they can," she said.

Ms MacDonald said the Whanganui District Health Board have met with local health professionals to implement a local action plan.

"We're looking at some innovative local responses like having Zoom as an option for virtual consults, particularly for follow-ups to avoid people having to travel five hours round circuit to access a follow-up specialist assessment in Whanganui."

For local logging truck company, McCarthy Transport, the detour was adding an extra 130 to 200 kilometres to their trip, the company's chief executive Steve McDougall said.

Mr McDougall said they understood the road won't be fixed anytime soon, but would like more information on alternative routes, because some detours only suit light vehicles not big trucks.

Mayor Don Cameron, who was at the meeting, said there's a huge increase in freight going through the road in the last three years, and the closure was concerning.

"It means for the southern districts like Whanganui, Rangitikei and place like that, their price of having goods delivered is going to move up quite markably, and that will happen almost immediately. It's not just Ruapehu that's suffering it. It's also obviously further down in the south region as well," he said.

He said businesses in Raetihi were used to adversity and want everyone to know the town was still open.

The transport agency said its geotechnical engineers were assessing the site to determine the severity of the slip and the options for reinstating the road.