Two years on from the Harvey Weinstein scandal, women in the film industry are optimistic about change but say there's still an awful lot to be done. 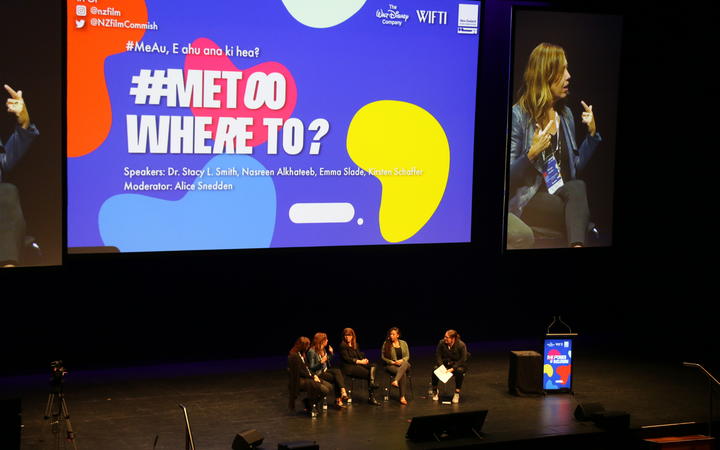 The two-day Power of Inclusion conference, organised by the New Zealand Film Commission, is being held in Auckland this week.

It features industry leaders and aims to generate momentum for a future where gender representation and inclusion are the norm.

Mr Weinstein, who has produced many award winning films, was dismissed from his film company and expelled from the Academy of Motion of Picture Arts and Sciences.

More than 80 women have come forward accusing Mr Weinstein of sexual harassment, including rape, and he is still before the courts.

But out of the scandal, the Me Too movement emerged, encouraging women who experienced abuse to speak up.

It also fueled the fire for gender equality and representation.

At the Power of Inclusion conference in Auckland, Kirsten Schaffer from the group Women in Film, spoke about creating a helpline for women in the United States who had experienced abuse.

"As time has progressed, we have been hearing a lot more stories about things that are happening currently," she said.

"So women who are experiencing harassment and abuse... I feel like we have barely scratched the surface."

Ms Schaffer said she remained optimistic about the movement, two years on.

"I think there's a lot of authenticity, there are a lot of very committed people, [but] of course there are people who ... just love the merch," she said.

Her counterpart in New Zealand, Emma Slade, who created the Screen Women's Action Group, said the culture was definitely changing.

"There is movement and, of course, for some people it may not come fast enough and that's understandable but at least it's moving in the right direction and I think New Zealand is definitely part of that too," she said.

Academic Stacey Smith said in the last decade only 4 percent of the top 100 studio films have been directed by women but that had changed.

"This year, for the first time ever, the percentage of female directors across the top 100 growth in films is going to be between 12 and 14 percent," Ms Smith said.

"So, no, I'm not cynical because we've seen a three-year uptake. In the last three years, the percentage of under-represented directors, on screen in big Hollywood movies, that's increased," she said.

But Ms Smith said there was still a lot to be done.

"Make inclusion everyone's responsibility in moving forward. I don't think we're there yet in this conversation," she said.

Filmmaker Nasreen Alkhateeb said there was also still more support for white women as opposed to women of colour.

"When harassment or any kind of bias or discrimination happens to a white woman, it's more acknowledged. More media covers it. There is more focus there, but I'm optimistic. I'm having conversations with my colleagues which I never had before," she said.