The Ruapehu district mayor is urging Ohakune residents to be vigilant as the police continue searching for the man who stole a police car at gunpoint on Saturday night.

The man they're looking for is Tama Michael Rawhiti - who also sparked a manhunt in 2012 for drugs and firearms offences - and is currently the subject of a parole recall warrant. 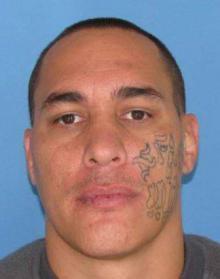 Mr Rawhiti is believed to have at least one firearm and the public are being warned not to approach him.

Police said they have searched several properties in the Ohakune area.

Mayor Don Cameron said the police told him the suspect is being hidden by friends and may soon try to flee.

"If you're in Ohakune you'll see police and they'll be directing people - keep them away from certain areas without a doubt.

The incident began when two police officers stopped a woman to carry out a breath test in the town on Saturday night.

Police said a man, who had been partly hidden in the back seat, got out and pointed a firearm at the officers.

After stealing the car, the pair crashed it into a gatepost and fled on foot.

Police were able to recover the patrol car which was slightly damaged.