The widow of a young Auckland father hit and killed by an Uber driver has told the man responsible she doesn't hate him. 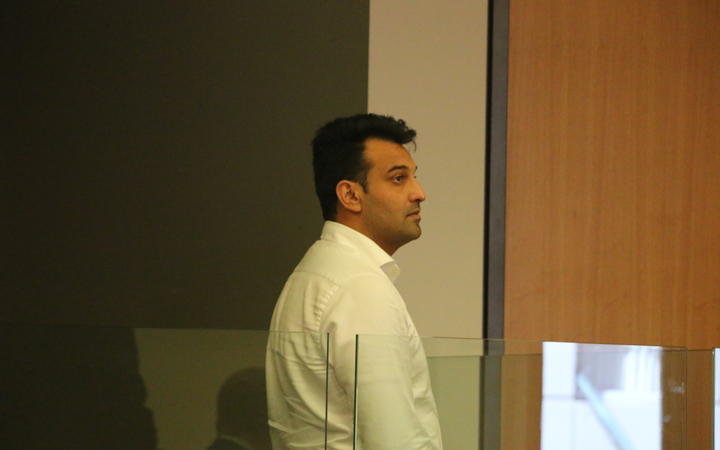 Daljinder Singh was driving up Hobson Street in Auckland's CBD on 6 June 2017 when he struck father-of-four Danniel Kopa, who later died in hospital.

He was found guilty of careless driving causing death after a judge-alone trial in the Auckland District Court in June.

Judge Peter Butler sentenced Singh to 200 hours of community work and ordered he pay $5000 in voluntarily reparation but did not disqualify him from driving.

At Singh's sentencing this morning, Mr Kopa's widow Calli Cleland said her family's world had been forever changed by his actions.

"Seeing Danniel for the very first time on life support was the most confronting thing I have ever seen in my life. He looked like my husband but with tubes everywhere.

"I knew that that person lying before me would never be coming home to be my husband, and the daddy to his four beautiful girls, that he was when he left for work that morning."

The court heard Ms Cleland and Mr Kopa were teenage sweethearts and had four daughters, then aged five-years-old, two-years-old and eight-month-old baby twins.

"As a parent, nothing can prepare you for that conversation and I wish I never had to endure it. Since then, I've continued to have those gut-wrenching conversations and I'm well aware these will continue for the rest of our lives."

Ms Cleland said the family had recently gone to the movies to see the remake of The Lion King, when her eldest daughter turned to her after Mufasa died.

"She said, I know how Simba feels, this is just like another version of my life. Heartbreaking doesn't do justice to what this has done to the girls."

She said the family had since relocated to the Bay of Plenty, where she had to adjust emotionally and financially while also being both "mum and dad" for her children.

"Even as we stumble and push forward with our daily lives, there is constant darkness; a feeling that Dann will not be there to see his four girls grow.

"There is so much he will not be here for; celebrate birthdays, play the first netball game, lose the first tooth. Dann didn't get to see Zoe write her name for the first time or the twins taking their first steps and he will not be there to walk them down the aisle or when our grandchildren will be born."

Singh's lawyer Shannan Withers acknowledged Ms Cleland's strength in speaking to the court and said his client was offering $5000 as voluntary reparation.

He said it was clear the crash was unintentional and in a mere 6.7 seconds the two men had been unable to see each other before impact.

"There are two men, completely separate, travelling for some 6.7 seconds to a precise point of impact that, for lack of a better description, appears to have been ordained by the angels. There's no sense or rhyme to it."

He said his client, who pleaded not guilty and stood trial earlier this year, was remorseful and could relate in some way to Ms Cleland's grief, having lost his mother in a cooking explosion at 5-years-old.

Mr Withers said Singh had struggled to return to life as normal after the crash, having difficultly with work and his relationship, and sought a discharge without conviction.

This was opposed by police prosecutor Sergeant Phil Mann, who said the defendant had failed to identity tangible future consequences of being convicted.

"The tragic consequences of that event, being the loss of life, is a burden to carry for all concerned. It's not dependent on the outcome of a discharge without conviction."

Judge Butler declined Singh's application for discharge without conviction but said the natural consequences of a conviction - namely disqualification from driving - could be remediated by an application under the Land Transport Act, which his defence lawyer had made.

"I intend to grant that today so I'm not going to be disqualifying you at the conclusion of today's hearing. If I do that, then the consequences of a conviction for you could not be said to be out of all proportion to the gravity of the offence."

Nearing the end of her victim impact statement, Ms Cleland turned to Singh and addressed him directly.

"I do not hate you or have any ill feelings towards you. I understand you did not wake up that morning to hurt Danniel and most of all I understand this was a tragic accident that sadly could have been avoided in six thousand different ways.

"I have had so many choices taken away from me in this but I work really hard to not let this define me or the girls. I hope that you choose to live your best life moving forward, as Danniel's life was far more than enough lives to be ruined and lost in this.

"I want you to know that I tell my girls that it was an accident and that you're really, really sorry. You and I will always carry the 6th of June 2017 with us but please don't let it ruin your life. Live it the way Dann did; to the fullest."

Speaking after the sentencing, Ms Cleland said she was "overwhelmingly relieved" Singh had been convicted and sharing her victim impact statement in person to the court had provided a sense of closure.