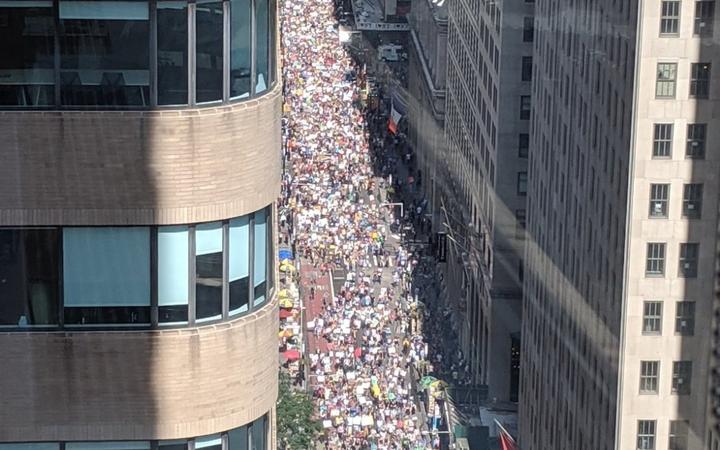 Jacinda Ardern is in New York to attend the UN General Assembly and she is to address the UN's Climate Action Summit at about 2.30am overnight New Zealand time.

Her speech comes in the wake of a dire omnibus report which details in stark terms how the climate is changing faster than forecast.

The World Meteorological Organisation report covers the five years to June and pulls together the latest science to help inform world leaders at the summit.

The report states the tell-tale signs of climate change - sea-level rise, ice loss and extreme weather - has increased over the period - which was the warmest on record.

It said countries must triple their climate emissions targets to limit global warming to 2 degrees.

"Time has run out really. We need to be seeing action immediately, we need to turn off the tap of carbon emissions right now."

Ms Ardern is expected to outline New Zealand's approach to agriculture and climate change in her short speech.

Sophie Handford is a national coordinator for the nationwide schools climate change strike happening this Friday.

She said this year's summit could be the last chance for global action, and Ms Ardern needed to seize the moment.

"I think bold and ambitious action are two really main points which I think it's important that [the Prime Minister] brings about in that conversation.

"Because the time for talking is over - we're getting to the point where it really is crunch time and it's a moment in history that if we let slip by we might not have a world to pass onto the future generations."

"We're hoping that the Prime Minister will be making tangible commitments to show how New Zealand is planning to halve its emissions in the next decade as well as issuing support in tangible ways that we can help other countries do the same thing."

Prof Renwick agreed the planet was running out of time and the world leaders at the UN meeting must come out with a clear strategy.

"It's hard to imagine just how catastrophic that could be.

"We are sitting on a time bomb here if we don't take action."

Ms Ardern is to give a separate climate change speech to a private sector forum luncheon for major business leaders and heads of states and government after 5am tomorrow morning New Zealand time.

UN Secretary-General António Guterres will issue a summery of commitments from world leaders at the end of the summit.