A Napier man's wedding ring has taken a miraculous 2000km return trip thanks to an eagle-eyed Dunedinite and a bit of plain old luck. 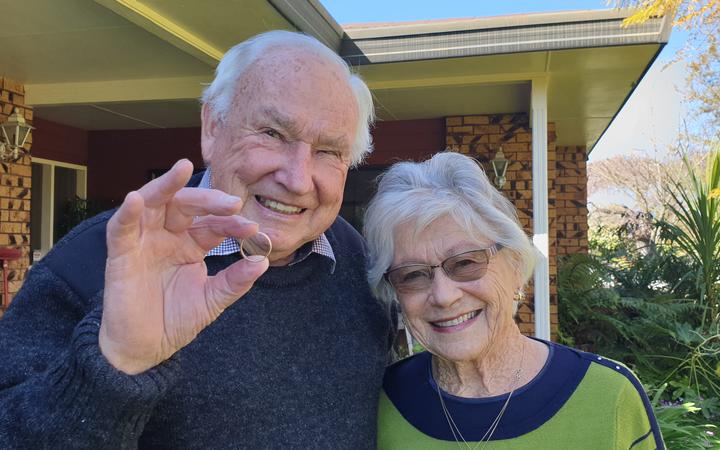 Don and Shirley Alexander at their home in Napier after his ring took a return trip from Dunedin. Photo: RNZ / Anusha Bradley

Don Alexander, 84, lost his ring while packing up crates of donated lemons and grapefruit destined for the elderly in Dunedin.

"All of a sudden I realised I had lost my ring. We had 12 bins of fruit and we thought 'which bin is it in?'"

They heard Mr Alexander's ring was missing, but despite searching high and low it could not be found.

It was not until three days later that something caught Mr Johnston's eye while he was walking on the gravel driveway outside.

"I found this shiny gold ring glittering in the sunshine down here. It was pure chance.

"The only reason it could get there is that when we shifted the crates it dropped out from somewhere," he said.

Don and Shirley Alexander on their wedding day. Photo: Supplied

The treasured item was sent back to its owner, who couldn't believe his luck.

"I mean fancy going all that distance. That was really a surprise because I didn't expect it to be in Dunedin, I expected it to be in the bins of fruit we still had here."

It was actually the fourth time his ring has gone missing, Don's wife, Shirley Alexander said.

It had been thrown with out the potato peelings, lost in a Wellington garden and slid into the deep crevice of a couch.

The ring was being kept on the mantelpiece for the time being.

"I thought that was the safest thing to do," Mr Alexander said.

"I told him he better get it back on in case someone thought he was on the market," Mrs Alexander joked.

The ring would be sent to the jewellers to be resized as soon as possible and it was hoped both their rings would be worn to celebrate the couple's upcoming 62nd wedding anniversary.