A possible world record southern bluefin tuna has been hauled in by three fishermen at 'Spot X' somewhere near Gisborne. 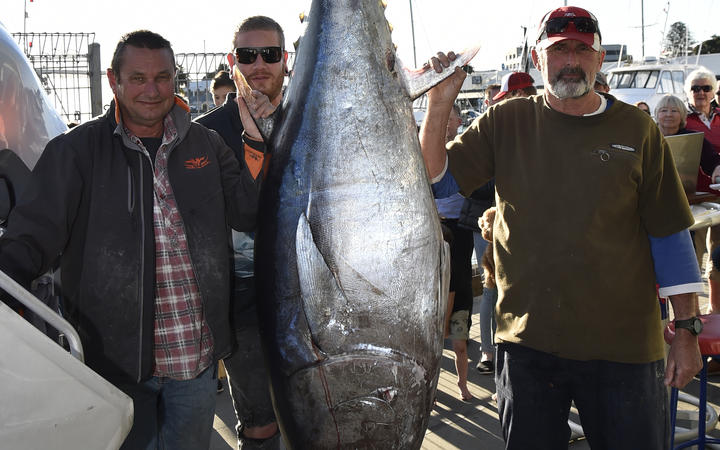 The 156.8 kilogram monster is a touch over the 155.1 kilogram record holder, which was also caught in Gisborne last year.

The angler, Graeme McKay, told Morning Report it is the boat's fourth bluefin but it's more than twice the size of what they've caught previously.

"We were fishing actually for swordfish ... something grabbed it (the bait) and took off and we thought maybe we had a sword and we weren't quite sure, maybe a shark had grabbed our bait, and sort of went hard on it, just trying to turn it and make sure it came towards the boat."

He said it pulled really hard and they realised it was a actually a tuna.

The fishermen didn't think they'd even come close to a world record.

"We have a little bit of rivalry with a couple of other mates on boats and a mate of ours caught a 131kg one and we though oh, as long as it beats that we'll be happy as."

There's now a lot of paperwork to be done, and the fishermen needs to send their gear off to California to be certified.

"We've done the measurements and everything looks good at this stage, we try to make sure everything's IGA legal before we actually go out, it's all sort of well within the perimeters they set so all the i's are dotted and the t's are crossed and everything's right so we'll send it off."

The crew will find out in a few weeks whether or not they've set a record.

In the meantime McKay said it's a tasty tuna, especially lightly seared.