Police are investigating a second Christchurch robbery in two days by a man wielding a hammer. 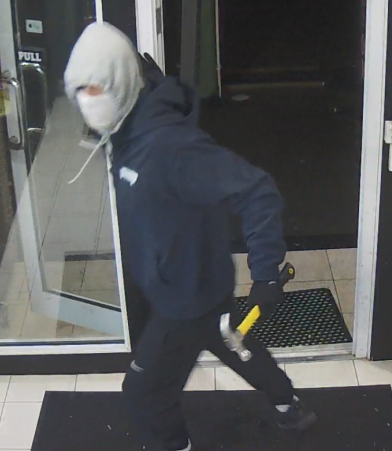 One of the men in last night's robbery was carrying a hammer Photo: NZ Police

They said three men - one armed with a hammer - stole cash and cigarettes from a liquor store on Woodham Road in Linwood about 7.45pm yesterday.

The day before, three offenders, all armed with hammers, stole cash and cigarettes from a dairy in Woolston in the early hours of the morning.

Officers want to hear from anyone who saw a white Mazda Demio in the area of last night's robbery.

There have been three aggravated robberies in Riccarton, Woolston and Linwood in the last week alone, which Detective Sergeant Brad Greenstreet said were being investigated.

"At around 8.50pm on Monday, 12 August, four people entered the Riccarton Liquorland, one armed with a hammer, and stole cash, cigarettes and alcohol," he said.

"At around 2.30am on Saturday, 17 August three men, two of whom were armed with hammers, entered the Night and Day on Ferry Road in Woolston, and stole cigarettes.

"Later that same day, at around 7.45pm, three men, one who was armed with a hammer, entered the Woodham Road Liquor Store by smashing their way through a locked rear-entry door."

Police said there was no evidence that linked the robberies, barring some similarities.

Mr Greenstreet said no one was injured, "however, the victims are all understandably very shaken" and were getting the support they needed.