Waikato Hospital has put out a plea for only people with real emergencies to go to emergency department, as the hospital copes with an influx of patients. 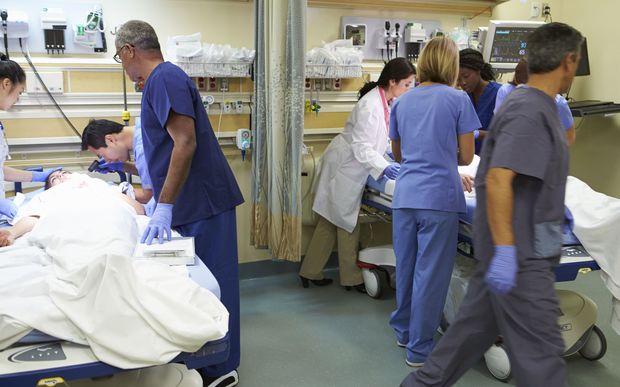 The emergency department at Waikato Hospital has seen an influx of patients this winter. Photo: 123rf.com

The hospital said its 650 beds are nearly full due to a high-number of elderly patients with respiratory conditions, and a lot of sick children.

The number of people admitted suffering from influenza has recently fallen after reaching a high about two weeks ago.

Chief operating officer Ron Dunham said winter contributed to it and most hospitals in the country were extremely busy.

"We are chock-a-block. We have just managed to free a few [beds] to transfer patients out of ED, but they are still coming in the door."

He said a lot of patients had different disease statuses and they tended to stay in hospital longer than fit and healthy people.

"Road accidents for instance, we have had quite a few of those."

He is advising people with non-urgent conditions to first go to their GP.

"Certainly if you have an emergency dial 111 and come into the ED and we will be pleased to tend to you, but if you have a minor ailment, that you think can be treated by a GP or a chemist, certainly try them first."

A new system was recently started at the front desk in the ED which enables some patients to be referred on to after-hours GP clinics, which according to Mr Dunham seemed to be working well.

He said the free Healthline 0800 611 116 was also helpful in getting advice on the degree of urgency for any particular patient.

Mr Dunham said the time spent waiting in ED may take longer due to the influx of patients.

"We triage patients and attend to the most urgent first and if you are less urgent it may meant that you have to wait a bit longer."

Mr Dunham said predications were that patient numbers were likely to start falling within a few days.

"It's quite a nifty little predictive tool we use which looks at capacity needs over the next week or two and it appears to be predicting that it will lessen off this coming weekend and early next week will be slightly better."

The tool takes the history of the number of patents presenting and the type of conditions and projects it forward.

"It's very accurate and we use it all the time," he said.