Police and the Whangārei District Council are defending their decision to shut down a hellfire-and-brimstone preacher in the city mall. 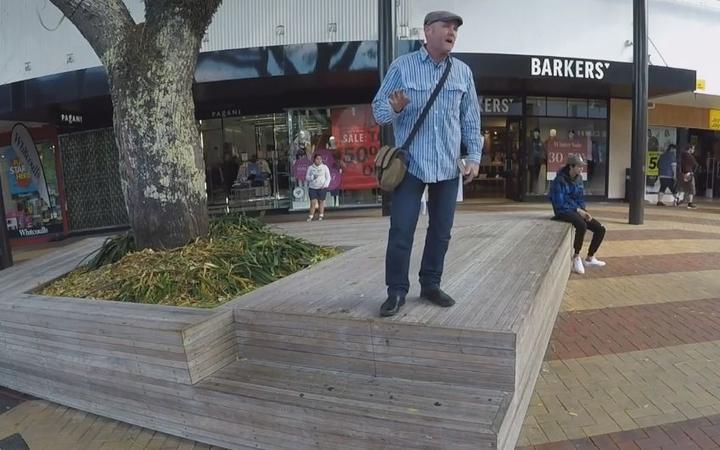 The preacher was asked to move on after haranguing bemused shoppers in Cameron Street last month.

But free speech campaigners are now challenging the use of the police to silence him.

Street preacher Grant Edwards stood in the Cameron Street Mall, for more than 20 minutes filming himself and warning passing sinners of their imminent fate.

A young couple with a baby asked if they'd really go to hell if they weren't married.

Apparently, yes, along with a lot of other locals, according to Mr Edwards.

"If you are a feminist, a lesbian, a homosexual ... if you are living in sin, if you smoke weed ... that's drunkenness. The Bible says drunks are not going to heaven," he shouted.

Mr Edwards also managed to slip in some zingers about Catholic priests, Krishna and the Prophet Muhammed.

An irritated busker waiting for his turn on a stage told Mr Edwards he was judgemental and was told he had little hope of redemption.

"You are on your way to the lake of fire for eternity, because you've got a rebellious spirit; and you're going to hell like a greased bullet until you repent," Mr Edwards admonished him.

Most passers-by saved their ears - if not their souls - and gave the preacher a wide berth.

But some complained to council security officers that he was disturbing and upsetting them.

Eventually a police officer appeared and Mr Edwards reluctantly left, brandishing his copy of the Bill of Rights.

"I'm going to stop preaching because I don't want to be arrested, but you'll be in court for breaching the Bill," he told the officer.

The officer told him he'd been offending people.

"Offending is part of free speech," the preacher replied.

The Free Speech Coalition said police should not be involved in suppressing opinion.

Mr Edwards had every right to express his beliefs in public, spokesperson Rachel Poulain said.

"I think what he was saying was absurd and quite frankly I'd probably find it quite offensive, but you can engage with it - or not.

"You can go about your day and ignore him or you can use your freedom of speech and say, 'Get stuffed, you lunatic' and walk on by."

For the police, it was less about free speech than disorderly behaviour.

"Police acknowledge freedom of speech but we also have to consider the right of members of the community to feel safe, and go about their business uninterrupted," he said.

The Whangārei council is defending its stance and the City Safe security officers who first approached the preacher and asked him to tone it down, then called the police when he refused.

Spokesperson Ann Midson said the council wanted the mall to be a vibrant place with performers and speakers but the public had a right not to feel abused or unsafe.

"We don't want people to feel threatened, or frightened or hurt or upset, and that's the approach we take. It's not heavily proscribed; it's about keeping the place safe for everybody."

Ms Midson said Mr Edwards had now asked the council for a letter saying he could continue to preach in the mall.

But it also reminded the preacher that under its Public Places Bylaw, he did need council consent to hand out his pamphlets.

Ms Poulain of the Free Speech Coalition said that sounded suspiciously like censorship.

"(Vetting) the content of pamphlets... I think that sounds quite creepy and authoritarian."

But Ms Midson said the rule meant the council could make sure pamphlets and fliers were not indecent or offensive and didn't break any laws.

The overall aim of the Public Places Bylaw was to keep city environments like the Cameron Street Mall comfortable and pleasant for the people who use them, she said.

Mr Edwards has not yet responded to a request for further comment.