Nato secretary-general Jens Stoltenberg has praised New Zealand's response to the 15 March terror attack and commended the Prime Minister's "outstanding leadership and courage" in its wake. 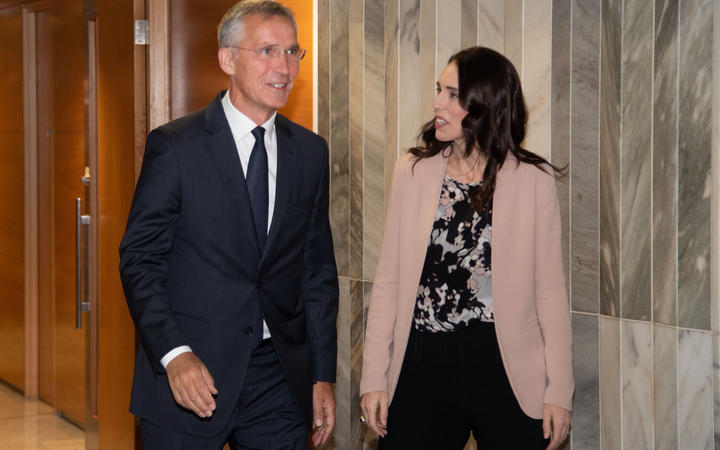 The former Norwegian prime minister sat down with Jacinda Ardern at the Beehive this morning following a visit to Christchurch on Monday where he met Muslim leaders and laid a wreath at the Al Noor mosque.

Speaking at a media conference in Wellington, Mr Stoltenberg described his Christchurch visit as a "touching and important experience" and said he was moved by the the resilience of the local community.

Standing alongside Ms Ardern, Mr Stoltenberg paid personal tribute to the Prime Minister for her response to the shootings in March.

"Your outstanding leadership and courage have inspired and impressed people around the world. You have shown that freedom prevails over oppression, tolerance over intolerance, and love always prevails over hate."

He said he was "impressed" by the way New Zealanders stood together and championed the core values of tolerance, democracy and individual liberty.

"As long as we do that - in New Zealand, in Norway, in elsewhere - then the terrorists will not win.

"As long as we are standing up for our values, they are losing, we are winning. And I'm absolutely certain that our values are stronger than their values."

Addressing the media conference, Ms Ardern thanked Nato for its messages of sympathy and support after the 15 March terror attack and acknowledged Mr Stoltenberg's visit to Christchurch.

"I know that your words will have been a comfort, particularly given your experience in Norway."

The El Paso suspect is believed to have posted a four-page document online in which he expressed support for the accused Christchurch gunman.

Mr Stoltenberg declined to comment specifically on the massacre, but urged people to defy terrorists who tried to inspire one another.

"Terrorists around the world are referring to each other... they try to inspire each other, but we just have to stand together and defy them regardless of their political message.

"This is about violence, it's about terrorism, it's about crime, it's not about political views."

"We're... united in our absolute determination to work together to halt the vicious cycle of extremism breeding further extremism."

The two leaders also discussed New Zealand's contribution to missions in both Iraq and Afghanistan.

Earlier this year, Ms Ardern announced Defence Force troops would pull out of Iraq by June 2020. Cabinet papers show that was despite a direct request from Nato to stay on.

Asked about the withdrawal, Mr Stoltenberg declined to criticise the decision and instead acknowledged the mission was entering "a new phase".

"We have made a lot of progress... I welcome the fact that New Zealand has committed to step up the financial contributions to training."

"Your trainers... in Kabul are helping the Afghans to create the conditions for peace and preventing Afghanistan from every again becoming a safe haven for international terrorism.

"We now see a real chance for peace in Afghanistan. We are closer to a peace deal than ever before."

Later on Tuesday, Mr Stoltenberg is expected to lay a wreath at Pukeahu National War Memorial Park before departing for an official visit to Australia.