Many people around the South Island this morning woke to snow that closed roads, schools and isolated towns. 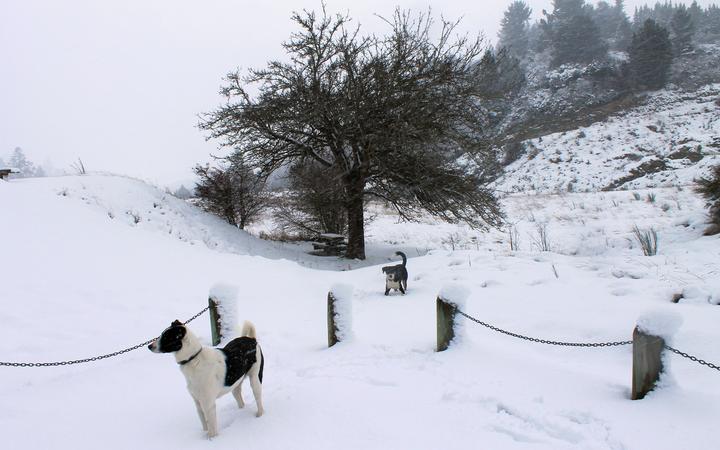 Dogs in the snow near Lawrence in the Clutha District this week. Photo: Supplied / Jailbreak Cottage

Snow fell to near sea level in places with temperatures plummeting overnight, dropping to -8C at Aoraki-Mt Cook.

Highways were closed for much of the day, opening with warnings of snow and ice.

The small Clutha community of Lawrence - along the main route between Dunedin and Queenstown - was cut off for several hours due to the snow.

Jailbreak Cottage owner Mel Foster said Lawrence was locals only while the popular tourist route was shut off - an unusual experience for the town.

While it would take a toll on some businesses, Ms Foster said most embraced the snow day.

"A lot of people work out of Lawrence, so they weren't able to commute to their jobs so it was very much a compulsory relax and enjoy the snow day.

She took her two dogs for a walk at former goldfield Gabriels Gully, which she said had snow 20 centimetres deep in some places.

"Quite a surreal experience when you're the first person at snow like that and the dogs were bounding through the snow and sinking quite deep actually. But they loved it."

Over on the West Coast, dairy farmer Mike Havill said he was rescuing calves born yesterday in snow up to 10 centimetres deep.

He had owned his farm, half way between Greymouth and Reefton, for 11 years and had not seen snow like it.

He said it was lucky it was not windy, which would have lowered the temperature further.

"Calving date was due to start in a few more days, but there's about a dozen cows decided they'd had enough yesterday so we were rushing around, picking up calves, getting them in the shed and getting a warm feed into them."

Up north, access to and from Golden Bay was cut off until mid-morning as heavy snow closed State Highway 60 over the Takaka Hill. 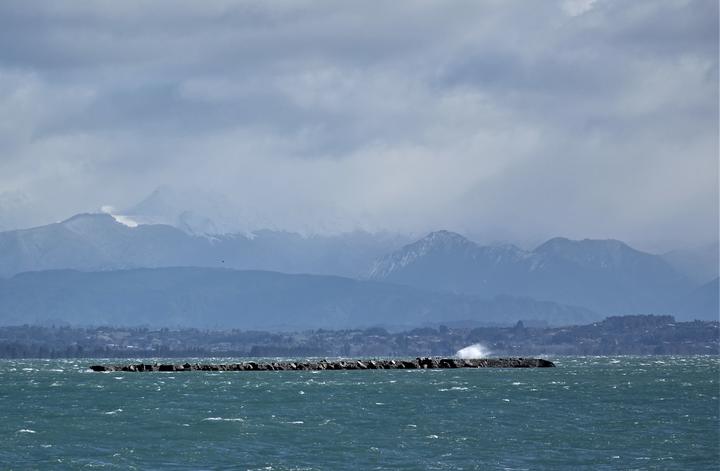 A freight company boss, Merv Solly, said snow in the area was the lowest in half a century and created a big backlog of freight.

Others in Takaka embraced the novelty of snow in Golden Bay.

Wholemeal Café owner Aydee Green said it created a bit of excitement among locals in the village.

"I think everyone just gets a little bit excited more than anything when the snow's this low over here."

MetService meteorologist Peter Little said it had been a significant snow event.

"I mean much of Southland has been blanketed right down to sea level, and it is unusual to see snow falls near to sea level on the West Coast as far north as Westport.

"It is an unusual snow event, we may get these events maybe once a year every couple of years."