By Luisa Girao for the Otago Daily Times

After working his whole life as a teacher and bus driver, a Southland retiree never thought he would not have a home to live in.

But on a low income and having to deal with health problems, 69-year-old John does not have a proper roof over his head. 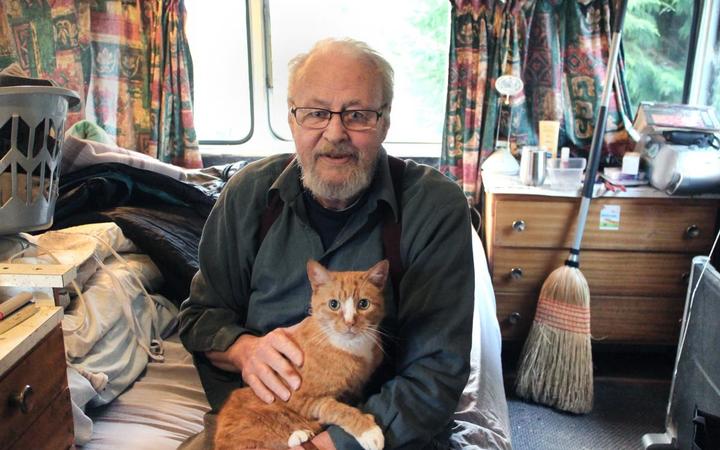 After a rough few years, Southland retiree John - with his cat Puss - now lives in a caravan, which was a gift from friends who were worried about him living in a tent. Photo: Otago Daily Times / Luisa Girao

He is in the same position as hundreds of Invercargill residents who are living in inadequate housing.

After living in a tent for three months, he was given a caravan.

"In my life, I've had to learn to accept things as they are and deal with the situation [I'm in]."

It was not always a struggle.

At the end of the 1990s and early 2000s, John was a primary school teacher living a comfortable life.

But when the school he had taught at for 12 years changed direction he found himself unhappy in the job.

As the leader of a Scout group, he held a P endorsement licence which meant when he was offered a job as a bus driver, he grabbed the opportunity.

Because he did not feel secure in his job, he decided to get rid of his mortgage and sell his house.

"I never expected I would not be able to afford another one. I was too old for that."

He rented for a few years but had to move out of the flat he was living in last year when his landlord decided to sell the property.

Two heart attacks and surgery costs depleted his savings and, to make the situation worse, the taxi company he worked for shut down.

His search for a new home came to nothing due to a shortage of rental properties, competition for homes and the cost of renting.

At the start of the year he was put on the waiting list for a Housing New Zealand property but still had not been placed anywhere.

"I felt like there was nowhere else to go."

When a space in a friend's backyard became available he took the opportunity.

"I lived there for three months - a bit longer than I ever wished.

"Nothing was there for me. It was hard because it wasn't too comfortable, I didn't have much space and no insulation."

Worried about his situation, a group of friends decided to help him buy a caravan so he could live in a better place.

"It could turn out worse for me. I had friends to help me. It is not a house yet, but is much more safe."

Southland Community Housing Group estimated in April that 500 people did not have adequate housing in Invercargill and 150 were on the waiting list of Housing NZ.

Group member Dave Kennedy said Invercargill only had 350 state houses and many of those on the waiting list were a high priority.

This article was first published on the Otago Daily Times