A prominent Northland sculptor says MPI should be consulting artists when it has to decide whether a log is a log or whether it is art. 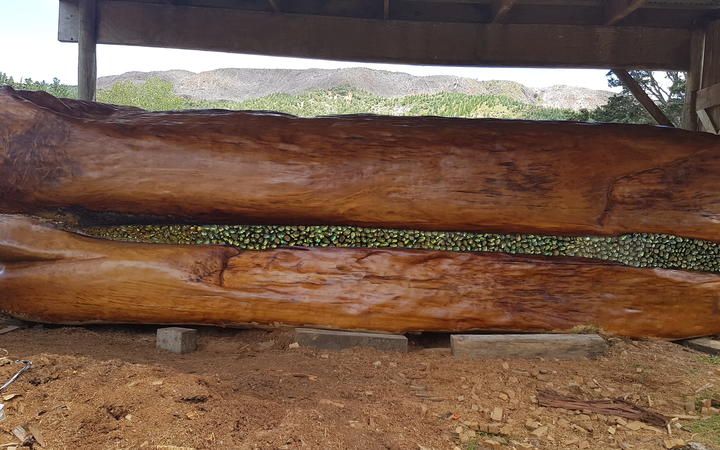 A prominent Northland sculptor says MPI should be consulting artists when it has to decide whether a log is a log or whether it is art.

Under the Forests Act, indigenous timber can be exported only as a finished or manufactured object.

Chris Carey, who has sold work overseas and judged a number of competitions says some kauri pieces described in recent years as sculptures lack crucial qualities he would expect to see in a genuine finished art work.

Photographs of items like the 'temple poles' made for export in 2014 by the Ancient Kauri Kingdom near Kaitaia, have him scratching his head.

The carvings of a tiki, a fern and a bird of indeterminate species resemble primitive cave drawings, Mr Carey says.

"There's an ad hoc approach to that work and probably little in the way of craftsmanship ... looking at the hieroglyphics on the side I thought someone was pulling someone's leg."

"A log cannot be a finished or manufactured product unless the work on it is so extensive that it has lost its identity as a log. Surface carving or decoration, however elaborate, is unlikely to cause such loss of identity," the court said.

MPI's forestry officials had to decide this year, if a 22-tonne swamp kauri piece, made to order by Kaihu kauri merchant Nelson Parker and his team, passed that test.

The giant piece was sent to China in January, while MPI was still considering the implications of the Supreme Court decision.

Nelson Parker is in no doubt that the piece created by his team is a work of art.

"It took us 400 man-hours to refine this thing from 28 tonnes down to 22 tonnes; we used 600 litres of resin; the fissure took 1500 litres in the end and we mixed kauri blocks into it to fill it; we added black oxide as a background and then we inlaid our kauri leaves and pāua, and did a final pour."

The carvings, of a fern, a kiwi and the words "New Zealand Ancient Kauri" were done by two young local men Aaaron and Jordan Lloyd who were skilled craftsmen and artists, Mr Parker says.

"That's what the client asked for. He came to the yard and picked out the log. Then we sent them numerous photos and plans and it took about eight designs till they said 'that's the one we want'."

The Chinese client stages exhibitions that included ancient kauri and had bought pieces from him before for that purpose, he said.

MPI files show Te Uru Rākau (forestry) officials asked for photos and letters from the client, showing those pieces are still used as exhibits, and were able to confirm that.

But the Supreme Court's comments gave them pause for thought:

"In relation to this sculpture, an assessor would recognise that the final form of the item retains an overall shape similar to a log," observed one official.

However, it was not in the same league as earlier lightly-carved logs which the court said would not pass the export test.

"The (log) sculpture has undergone manufacturing to an extent that transformed it from its raw form into a sculpture," the official concluded.

The files show the forestry officials consulted the Ministry for Culture and Heritage, Auckland Art Gallery and Te Papa in their quest to define a work of art.

The experts offered general guidelines, and in apparent contrast to the Supreme Court's comments, suggested the degree of modification was not necessarily a primary factor in terms of classifying a piece as art .

But none inspected the log in its finished form.

Northland sculptor Chris Carey says he would not pass judgement without seeing the log sculpture in person, looking at the design work and talking to its creators about their artistic intent.

He says arts professionals, rather than forestry officials, should be the ones doing that and making those judgement calls.

"If you want your electrical work certified you call a sparky and if you want your plumbing sorted you call a plumber. In other words you bring in an expert, and in the arts, that's an artist or arts professional, someone with recognised credentials in the field. "

In the end MPI approved the Kaihu piece in retrospect, as a genuine sculpture.

The Northland conservationists who took MPI to the Supreme Court last year and won their case, say the case shows the Ministry is still flouting the Forests Act, and thumbing its nose at the courts.

They are now preparing to go to the High Court and ask for a judicial review of MPI's decision.

Nelson Parker is exasperated with the group's continued campaign to stop the export of swamp kauri.

His is one of the few outfits still working in swamp kauri, employing people and creating valuable exports, he said.

"They (The Northland Environmental Protection Society) are like a dog with a bone. We don't drain wetlands - we get our timber by digging up dairy farms and paying for it. It would be quite different if we were out the backside of somewhere with a couple of chainsaws under a tin roof. But we've invested millions in our business; we get no grants, and we take huge risks."

Exporting the latest kauri piece had been one of those risks, making him liable to a $200,000 fine if MPI had decided it was unlawful.

"But I felt in myself it was right; I committed no crime. If most of New Zealand saw that sculpture on the Auckland wharf, it would blow their minds."

The sculpture sold for the price of a new car, Nelson Parker says.

*An earlier version of this story attributed a photo of a carved temple pole as one of Nelson Parker's creations. This was incorrect and RNZ regrets the error.