A man has made a brief appearance in court after a road roller was driven into a number of cars in Upper Hutt at around 12.25am today. 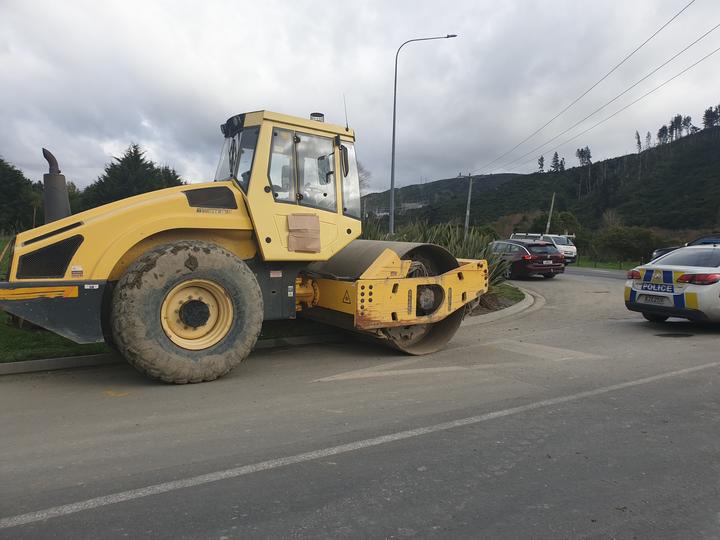 The 47-year-old has been charged with interfering with motor vehicles with reckless disregard for people and property, and driving with excess blood alcohol.

He was granted interim name suppression when he appeared in Hutt Valley District Court this morning.

He has been remanded on bail to reappear in court next month.

The police were called to Eastern Hutt Road in Silverstream after receiving reports that a road roller was being used to damage vehicles gathered in the area.

When they arrived at the scene, officers arrested two men but one was later released from police custody.

One person suffered leg injuries involving another vehicle, and another person received facial injuries in an altercation.

The person with leg injuries is in a stable condition in Hutt Hospital.

The five cars involved have now been towed away.

The industrial area was cordoned off until early this afternoon.

One eyewitness, whose car was damaged, described what he saw last night.

"I watched my car be dragged a couple hundred metres and smashed into a friend's ute and into the curb. My whole back-end is caved in, my wagon has been turned into a hatchback.

"I picked up a bloodied guy off the ground and threw him in the back of somebody's car and basically told them to get him to hospital."

There were more than 100 cars and 200 people at the gathering, he said.

"There was lots of screaming and yelling as 100 cars all tried to leave out of a one-way street at the same time with a roller chasing them."

Another eyewitness said they go to industrial areas like that so they were not disturbing residents.

"Everyone just wanted to get out, no one wanted to be anywhere near the roller."

One guy had his leg crushed when he got hit by a car as he was trying to run away, the witness said.

Another described the noise as "cars just turning on and people shouting 'go, go, go'."

He said this would not stop them having another car meet - one was already being planned for tonight.

Another eyewitness said several of the cars that were hit will be complete write-offs. He said the scene was chaotic during the incident.

"The roller came down the hill, started hitting the cars and it's like this is no joke and everyone just started fleeing. It was total chaos, absolute chaos, it was quite terrifying actually to be honest."

The Serious Crash Unit is investigating what happened.

The police would like to speak to anyone who was involved, particularly those who may have video footage.

Videos of the incident have been circulating on social media.

They show a large number of people and cars gathered at the site, with people yelling and swearing as a steamroller pushes cars aside.

One man yells, "bro, get your car out of here".

Police said it is clear this was a serious incident which had the potential for tragedy and that they are committed to working with the community on illegal street racing activity and anti-social driver behaviour.

Police said inquiries are ongoing and further charges are likely.