One can't accuse the All Blacks of being all sausage and no sizzle - and especially not today. 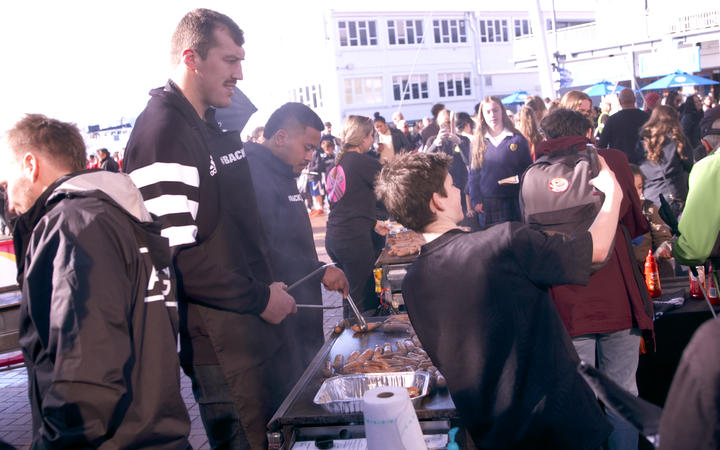 At least 500 fans met players who served up food for them at Wellington's waterfront today. Photo: Photo / Hamish Cardwell / RNZ

At least 500 fans were at a meet and great with players on a banger of a morning on Wellington's waterfront today - getting pictures and autographs, as well as snarlers from a barbecue manned by All Blacks.

The team play South Africa in the capital tomorrow evening. All Blacks lock Brodie Retallick said he was geared up for a fiery game.

But first, he had to survive the heat of the BBQ - feeding hundred of hungry fans.

"It's probably harder not to burn the saussies I think, but ... nah, it will be a good contest tomorrow night.

"The South Africans... have got some great depth to their squad at the moment, so no doubt it will be pretty physical as always."

Fans in Wellington were confident about the All Blacks' chances.

Vera Karataua and her daughter Nii Mills were looking forward to a win - and a fun weekend out.

"One hundred percent we can take it out, for sure, I'm hoping," Ms Mills said.

One brave figure in a Springbok jersey, Bjorn Wojt, said he thought the odds might actually be tipped towards his team.

"We beat [The All Blacks] last year here. We've a pretty good record against [the] All Blacks in Wellington."

However, Trent Ivil from Hamilton said he had complete faith in the New Zealanders.

And if meeting the All Blacks wasn't enough for one day, the band Six60 treated the crowd to a performance.

The band's bass player, Chris Mac, said their new single The Greatest had a message to match the spirit of the All Blacks - and of the nation.

"It's quite an inspiring song. It's about believing in yourself and aspiring to be the greatest.

"I think in a lot of ways that is the All Blacks, and in every single way that is New Zealand - that's the New Zealand narrative.

"We're a tiny Pacific island ... and yet we compete on a world stage and most often win."

Westpac Stadium's sold out for the Rugby Championship Test tomorrow evening, with kickoff at 7.35pm.

A campaign for the public to show its support for the All Blacks kicked off today with the World Cup in Japan less than a month away.

Fans are being encouraged to post pictures and videos to social media with the hashtag 'Back Black'.

New Zealand Rugby said the campaign's designed to capture the imagination of All Blacks fans and provide a platform for them to share their support.

Landmarks such as the Tokyo Tower, London Bridge and New Zealand's Sky Tower have also been blacked as part of the campaign.