The man at the centre of an armed stand-off with police in Napier last month had consumed "a large amount of methamphetamine" destined for a drug deal and used his pregnant partner and baby as a "shield" to protect himself from gang members he thought were out to kill him over the missing drugs. 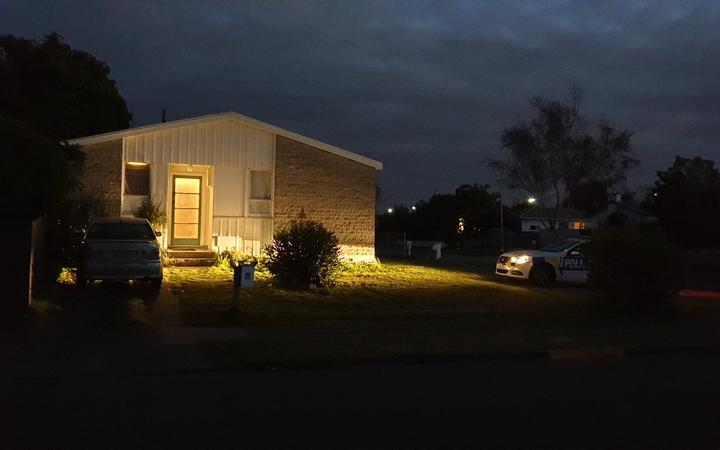 The address where Hemi Taylor was in a stand-off with police for 12 hours in Napier in June. Photo: RNZ / Anusha Bradley

Hemi Taylor, 25, pleaded guilty to two firearms charges after a tense 12 hour stand-off with police at his home in Alexander Avenue in the Napier suburb of Onekawa on 23 and 24 June.

The incident sent nearby schools into lockdown for several hours, closed roads, and prevented dozens of residents from being able to return to their homes that night.

He was eventually arrested after agreeing to came out of the house at about 1.30am on 24 June.

Taylor had consumed "a large amount of methamphetamine the week of June 22", a police summary of facts said.

The patched member of the East Coast Mongrel Mob was entrusted by other gang members to deliver the parcel of methamphetamine to Gisborne. But he did not make the delivery, instead it was believed he used the meth himself.

"During the evening of June 23 he became extremely paranoid believing that the Mongrel Mob were looking for him in order to kill him due to the missing drugs."

Earlier that afternoon, armed himself with a shotgun cut down to pistol length he and his partner of seven years and their 4-month-old daughter visited her mother in Napier.

"He paraded the firearm around the house before going outside and firing it at a fence yelling the gang slogan 'sieg heil'," the police report said.

After arguing with his partner over the baby, he grabbed the child and took her with him in the car with the firearm. Returning to the address a short while later he picked up his partner and drove to their home in Alexander Ave.

By this time police had been alerted and had located his car parked in the driveway.

"The defendant was in the house with the firearm and was using his partner and baby as a shield in case the Mongrel Mob were out to get him."

With police realising this would likely become a protracted incident, the area was secured with cordons and schools were put in lockdown. The Armed Offenders Squad was dispatched and a strategic tactics group from Wellington was flown to Napier from Wellington by helicopter.

"At about 1.30pm on June 25 after 12 hours of the area being shutdown the defendant agreed to surrender and was taken into custody."

It is understood he emerged from the house carrying his 4-month-old daughter.

"The defendant's partner was spoken to by police but declined to make any complaint," the report said.

Police later found a single-barrelled shotgun, cut down to pistol length, with one cartridge still in the barrel wrapped in cloth and hidden in drawers.

Taylor did not have a firearms licence and "had no reasonable excuse for being in possession of a firearm".

"In explanation the defendant stated he did not have anything to do with a firearm."

Taylor pleaded guilty to charges of unlawful possession of a firearm and discharging a firearm at Napier District Court on 17 July.

He will be sentenced in Napier District Court on 27 August, a few weeks after his 26th birthday.

Police would be seeking reparation to cover some of the "several tens of thousands of dollars" cost of responding to the incident.

"The police, Fire and St Johns Ambulance personnel spent considerable time at the incident, estimated to be in excess of 400 hours.

Court documents show Taylor has 28 previous convictions since 2010 including assault, threatening to kill, possession of a weapon and aggravated robbery.