South Korea says its jets fired hundreds of warning shots at a Russian surveillance plane that entered its airspace today. 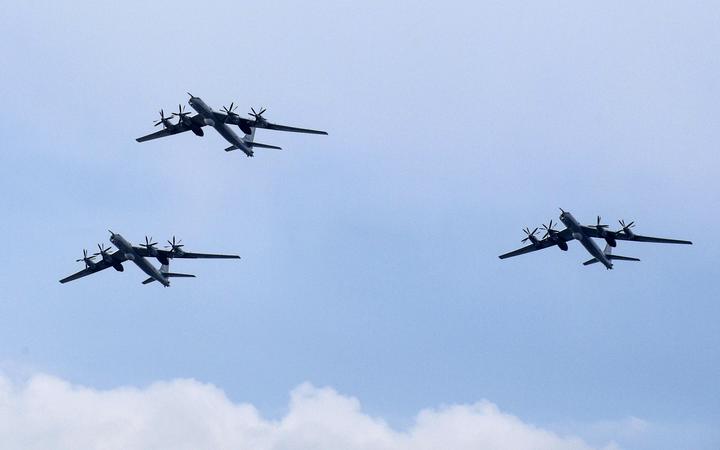 Officials said the plane twice violated the airspace over the Dokdo/Takeshima islands, which are occupied by Seoul but also claimed by Japan.

Moscow said two of its bombers carried out a planned drill over "neutral waters" and denied any warning shots were fired by South Korean jets.

This is the first incident of its kind between Russia and South Korea.

It said this group was made up of two Russian Tu-95 bombers, one Russian A-50 surveillance plane and two Chinese H-6 bombers.

Russian and Chinese bombers and reconnaissance planes have occasionally entered the zone in recent years.

Overseas aircraft must identify themselves before entering the KADIZ.

South Korea said one of the Russian planes - the A-50 - flew beyond the KADIZ and entered the country's territorial airspace at around 09:00 local time.

South Korean F-15 and F-16 planes were deployed to intercept it.

The military said it fired 10 flares and 80 machine-gun rounds during the alleged first violation.

It said the Russian plane then left before circling back round again, when it was met by 10 more South Korean flares and 280 machine-gun rounds.

In its statement, Russia only mentioned two bomber planes. It did not specifically acknowledge the accusation that it had also sent an A-50 that had strayed.

The head of South Korea's National Security Office, Chung Eui-yong, has lodged an objection with the Security Council of Russia, and asked the council to take appropriate action.

"We take a very grave view of this situation and, if it is repeated, we will take even stronger action," the South Korean president's office quoted Mr Chung as saying.

The Japanese government has lodged a complaint against South Korea and Russia.