The lawyer presenting a gas company that came forward after an explosion destroyed homes in a Christchurch suburb says his client will co-operate fully with an ongoing investigation. 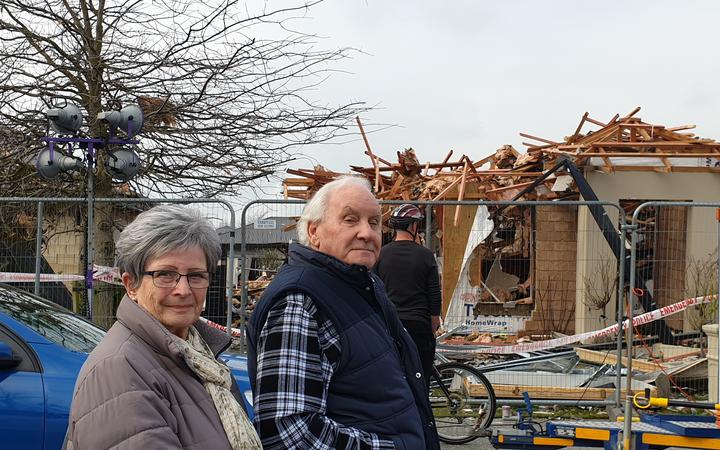 Beth and Warner Collins were concerned about using gas in her own property and wanted to know what caused the explosion at their neighbour's residence. Photo: Photo / Eleisha Foon

Simon Shamy, who is representing Gas Unlimited owner Glen Smith, said his client was deeply concerned for the people injured in the blast last Friday and for those who had their houses damaged.

Two people remain in Christchurch hospital. One is stable and the other remains in a critical condition. A third person being treated in Auckland's Middlemore Hospital is also stable.

It is understood Mr Smith's firm carried out work on 9 Marble Court prior to the explosion.

Mr Shamy said his client spoke to police at the scene last Friday and while a WorkSafe investigation continued, Mr Shamy refused to comment further.

RNZ spoke to some Marble Court residents who had come to sort property insurance with experts and collect essential items.

Some were visibly upset and others said they felt mentally exhausted.

John McGill said he rescued some of the injured a minute after the explosion and thought he was dragging out bodies.

Another family who were on holiday when the blast happened arrived today to see their house partly damaged. They were shocked to have seen their neighbourhood in tatters.

Elderly couple Beth and Warner Collins were concerned about using gas in her own property and wanted to know what caused the explosion.

"'We're all on reticulated gas where we are and we just want to know what caused this," she said.

Meanwhile, there had been no "formal discussions" with the contractor at this stage and any discussions would form part of the wider investigation, Canterbury Metro Area Commander Superintendent, Lane Todd, said

So far 14 homes still remain off limits, and at least five are uninhabitable.

A mining blast expert David Cliff said the residents of the house that exploded were lucky the consequences weren't worse.

"The uniform explosion can actually move in a direction and from the photos I have seen of the house that was damaged, it clearly moved in one direction predominantly, and it may have protected the people from being killed in the blast, because they might have been behind some sort of structures that act to reflect the pressure or could reduce the pressure in their direction.

"They should have been able to detect the smell of the gas itself," Cliff said.

Christchurch City Council has issued a total of nine Dangerous Building notices under the Building Act and police say the investigation could weeks.

Correction: In an earlier version of this story, Radio New Zealand incorrectly referred to a GasCo vehicle in a photo as a Gas Unlimited vehicle. RNZ accepts that GasCo is not in any way connected with or affiliated to Gas Unlimited or to work on the property prior to the explosion.