A Comancheros gang member who murdered a young father and tried to murder the man's wife in Māngere last year has been jailed for life. 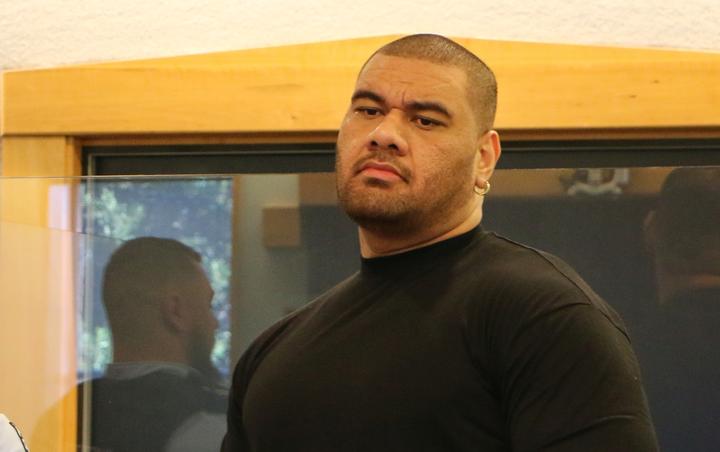 Villiami Taani shot Abraham Tu'uheava and his wife Yolanda multiple times during a methamphetamine deal on Greenwood Road in Māngere on 1 May.

Mr Tu'uheava, a patched Nomads member, died on the rural stretch but his wife miraculously survived, despite being shot in the head twice.

Taani appeared for sentencing in the High Court at Auckland this morning after pleading guilty to murder and attempted murder.

His cousins Fisilau Tapaevalu and Mesui Tufui were found guilty of the same charges after a four-week trial last month.

Abraham Tu'uheava was lured to Greenwood Road last May under the pretence of a potential drug deal.

He'd recently relocated back to New Zealand from Australia, where he became a patched Nomads member.

After getting out of his car carrying a bag full of $15,000 cash he was shot seven times in the arm, back and neck.

Mrs Tu'uheava was shot in the head twice and only survived by pretending to be dead until she was found by a passing motorist roughly six hours later.

During the trial, the court heard the killing may have been a hit ordered by the Comancheros gang in Australia over bad blood between the gang and Mr Tu'uheava.

But Taani's defence lawyer Ron Mansfield said his client maintained the shooting was not gang-related, despite Tapaevalu and Tufui's mutual affiliation with the Comancheros.

Mr Mansfield said his client was genuinely remorseful and had attempted - albeit unsuccessfully - to organise a restorative justice conference with the victims to assure them they were safe.

Justice Hinton said Mrs Tu'uheava, who still has a bullet lodged in her brain, was still suffering from ongoing physical pain and PTSD.

"She is in constant pain and attends medical appointments four times a week. She cannot work because of her injuries and her benefit leaves her only $20 at the end of the week after expenses."

The judge said Mr Tu'uheava's son was also struggling and his behaviour at school and at home had changed.

"He wears his father's clothes and looks at pictures of him at night.. Mrs Tu'uheava writes that she is so grateful to be alive because she does not know how her son would cope without both of his parents."

Justice Hinton said Taani's own family had written to express their shock and sadness at the 26-year-old's offending.

"They know you only as the kindest and most caring person and could not believe you had committed these terrible crimes."

The court heard Taani was also a father and had expressed some remorse to a pre-sentence report writer; saying he had to live with the fact Mr Tu'uheava's child would grow up without a father.

Justice Hinton said she was struck by the extensive damage done to both families through Taani's offending.

"There could not be a more tragic illustration than this case of the true effects of gang membership and methamphetamine use."

She agreed with the Crown that it was an "execution style" killing and said it involved a high level of brutality and callousness.

"The fact Mrs Tu'uheava lived is nothing short of miraculous. You went to some lengths to make sure she died... this was an execution style killing and there were a number of shots fired."

Taani was supported by his own family in court this morning. He waved to supporters, some of whom attended his cousins' trial in June, from the dock.

Justice Hinton jailed him for life with a minimum non-parole period of 17-and-a-half years.