Auckland Council is investigating after claims a major cosmetic store that opened yesterday polluted waterways by dumping waste paper products down the drain.

Sephora opened on Queen Street yesterday and celebrated by firing a cannon filled with paper confetti.

New Zealand Māori Council executive director Matthew Tukaki said the paper, along with other paper with cosmetic waste on it, was then loaded into laundry tubs and tipped down public drains. 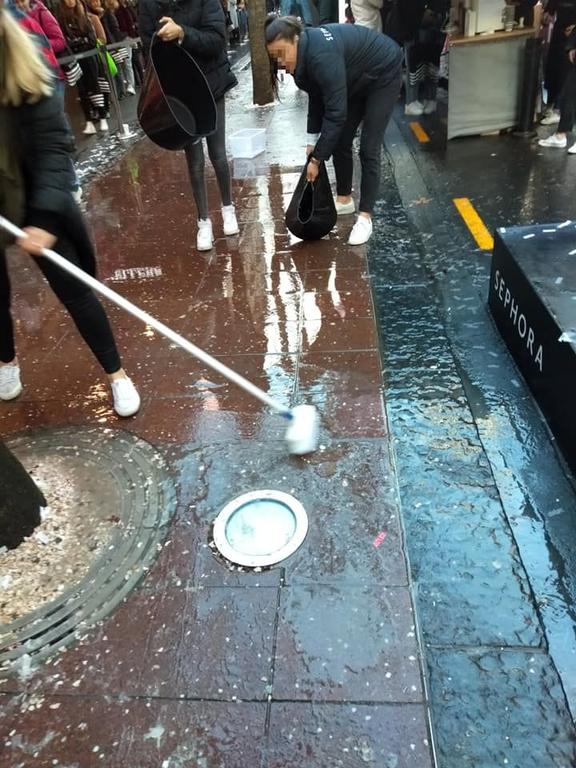 "All these little bits of papers has cosmetic residue on it ... dumping your stuff, Sephora, down the waterways of New Zealand by pouring buckets of your crap down our drains is absolutely abhorrent," he said in the video.

He said a Sephora staff member told him it had permission from the council to do it.

"I have witnessed first hand the use of large plastic laundry tubs filled to the brim with wastewater and paper laden waste with chemical cosmetics just being dumped and pushed into the drains - all as hundreds of young people line up turning a blind eye to it all - some of the same young people who turned out in droves to protest climate change and call on more environmental sustainability. Well, you can't have your cake and eat it too," he said.

"Now if you were there and witnessed the sheer amount of material being thrown down the drainways you'd be pretty shocked and I said 'well I cannot believe for a moment that any council around the country would allow this sort of waste - soluble or not, biodegradable or not - entering our waterways'," he told RNZ.

"Some of those drains on Queen Street flow directly into the harbour ... and there is no evidence from the company that the material they've used will not impact our environment."

Mr Tukaki said it was clear the company had planned to dispose of the waste in this way.

"They had black plastic tubs that you can get from The Warehouse and they had white straw brooms - they are the marketing and brand colours of Sephora - so somebody has thought about making sure that whatever they were using matched their own branding."

Auckland mayor Phil Goff later posted on social media that no such consent was given and said the council would be investigating.

Unacceptable for anyone, particularly a major retailer, to be polluting our waterways. Totally untrue that council granted permission for such behavior – waste must be collected & disposed of responsibly. I'll be writing to Sephora for an explanation & council will investigate

"Unacceptable for anyone, particularly a major retailer, to be polluting our waterways. Totally untrue that council granted permission for such behaviour - waste must be collected & disposed of responsibly."

Sephora has been contacted for comment but posted on social media that it had been working with Auckland Council for the past few months to prepare for the store's opening.

"Everything from traffic management to waste management followed the right protocols," the company said.

"The approved confetti used was biodegradable, water soluble and plant based and was cleaned up and disposed of appropriately. Excess water was only used where the confetti had already started to bio-degrade due to rainfall to further dissolve and clear the footpath avoiding any health and safety risks for the general public."

Sephora denied test strips had been washed down the drain and said they were only used inside the store and were disposed of appropriately.

However Mr Tukaki said the test strips had ended up on the pavement as customers had dropped them there.